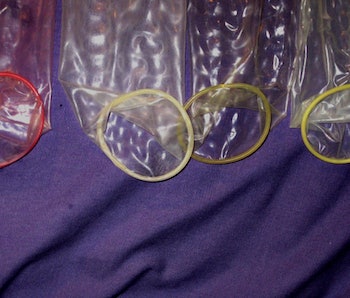 A new paper details the disturbing act of “stealthing,” which is when a man deliberately removes a condom during sex without his partner’s consent. This sick practice doesn’t just expose people to unwanted pregnancies and health risks like HIV and STIs — it’s a form of gender violence. By bringing academic attention to this issue, one researcher hopes to effect legal changes to protect its victims.

In the Columbia Journal of Gender and Law, Alexandra Brodsky, a fellow at the National Women’s Law Center, writes that stealthing is a common but undiscussed experience. Arguing that the removal of a condom transforms consensual sex into nonconsensual sex, Brodsky insists that legal statutes must be changed to include stealthing so that victims have the opportunity to press charges. Experts who specialize in sexual crime agree: When sex is nonconsensual, it’s rape.

“The law isn’t the answer for everyone, and it can’t fix every problem every time,” Brodsky told The Huffington Post. “One of my goals with the article, and in proposing a new statute, is to provide a vocabulary and create a way for people to talk about what is a really common experience that just is too often dismissed as just ‘bad sex’ instead of ‘violence.’”

In her paper, Brodsky details the interviews she conducted with women who had been victims of stealthing. All of the interviewees described the revelation that this happened to them as disempowering and a “demeaning violation of sexual agreement.”

“Survivors [of stealthing] describe nonconsensual condom removal as a threat to their bodily agency and as a dignitary harm,” Brodsky writes. “‘You have no right to make your own sexual decisions,’ they are told. ‘You are not worthy of my consideration.’”

Take note: Stealthing isn’t just a “sex trend.” In contrast, it’s thought to happen quite frequently. Brodsky’s paper is important because it highlights what appears to be a common yet undiscussed practice that, thanks to work like hers, is finally at the forefront of a national conversation.

Addressing the reasons why this act has become pervasive, Brodsky discusses online communities that advocate stealthing as a means for a man to exercise his right to “spread his seed.” These online communities support men in the practice, and teach them “best practices” on how to do it.

“One can note,” she writes, “that proponents of ‘stealthing’ root their support in an ideology of male supremacy in which violence is a man’s natural right.”

Previous research has connected this sense of entitlement to an increased chance of acting hostile towards women. A 2014 study found that entitled men are more likely to see women as manipulative and untrustworthy and in turn believe it is their right to treat women with hostility. The way men view women has consistently been characterized by researchers as a predictor of sexual assault.

Stealthing may not be a new practice, but the discussion about it is only beginning, which is the first step toward addressing it. Brodsky’s paper has certainly helped advance that conversation: Since it was published, many people on the internet have begun to publicly discuss their own experiences with stealthing and gender violence.

More like this
Science
Jan. 28, 2023
How does the placebo effect take hold? A doctor explains two influential factors
By Kathryn T. Hall. and The Reader
Science
Feb. 4, 2023
How Scientists Decide Whether Everyday Products Could Cause Cancer
By The Conversation and Brad Reisfeld
Science
Jan. 28, 2023
Viruses can speed up atypical brain aging — vaccines may offer peace of mind
By Andrew Bubak, Diego Restrepo, Maria Nagel and The Conversation
LEARN SOMETHING NEW EVERY DAY.
Related Tags
Share: