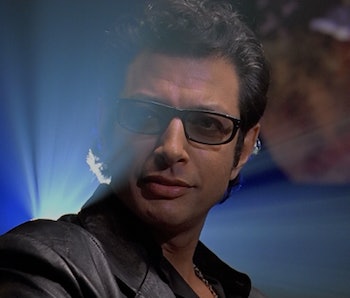 Must go faster! Jeff Goldblum will return as Dr. Ian Malcolm to the Jurassic Park universe in the untitled sequel to Jurassic World. While killer raptors should be worried, Chris Pratt should be even more worried since Goldblum is likely to beat him in the quippy one-liner department.

On Tuesday, The Hollywood Reporter revealed that Goldblum would join Pratt and Bryce Dallas Howard for the sequel, which is scheduled to hit theaters on June 22, 2018. According to early reports, Howard’s character will be wearing boots this time around in response to criticism that she spent the majority of Jurassic World running from dinosaurs in high heels.

Other than B.D Wong’s presence as Dr. Henry Wu, Jurassic World didn’t feature any cast members from the first three films. Bringing Jeff Goldblum back in a major role is similar to his return in The Lost World, where he went from being something of a comedic philosopher to the dramatic lead of the film. And like, Harrison Ford, Goldblum has been revisiting his popular science fiction franchises lately: He starred in the Independence Day: Resurgence in 2016, where he basically played the exact same character he played in Jurassic Park, which is fine. Because as much as audiences flock to the Jurassic films for the awesome raptors and terrifying T. rexes, the charming original characters from the first film are what made it a classic.