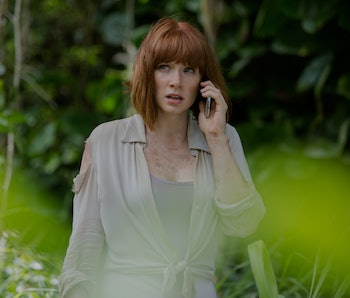 In a miraculous turn of events, Claire Dearing (Bryce Dallas Howard), the former operations manager of Jurassic World, will soon be wearing shoes that make sense when running from dinosaurs: boots.

Jurassic World director Colin Trevorrow had a pack of velociraptor-like fans on his tail after the movie’s 2015 premiere. Audiences noticed that the film’s female lead, Claire, was wearing kitten heels through the whole movie. The impracticality alone was enough, but the fact that Claire definitely had moments when she could have changed into the park’s no-doubt endless supply of uniform boots? It felt lazy and, in the eyes of some, regressive.

At the time, Trevorrow was surprised by fan response, telling iO9 that Howard herself insisted on wearing the heels. “They meant something to her personally,” he said. “She felt like, this is her talking, that those heels were her shield in a certain way as a woman. That’s just how she felt.”

But with Trevorrow moving into the production reigns for the Jurassic World sequel and director J.A. Bayona taking over, it seems that the world of Jurassic World is changing for the better.

Trevorrow tweeted “See you soon, [Bryce Dallas Howard]” with a collage of boots, though some of the boots still seem to be suspiciously high-heeled for a race through dense jungle. After all, the writers can’t let audiences forget that Claire is a woman.

Jurassic World 2 (with a booted Claire) is set for a 2018 release date.