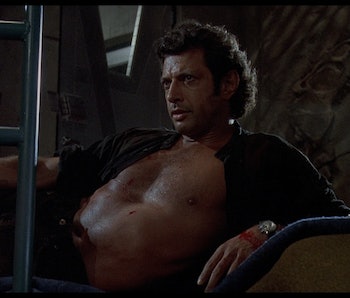 Jeff Goldblum in the original Jurassic Park was memorable for his strange, robotic laugh, for acting as a foil to the film’s heroes, and for showing a generation of children what his sweaty chest looked like. He delivered his intelligent lines with his unique, halting cadence, and made Dr. Malcolm a memorable character performance, instead of a forgettable minor character. When the team came together for The Lost World in 1997, Goldblum’s Dr. Malcolm was suddenly thrust into the straight man role, making the sequel much less magical than the first. The same is about to happen with Independence Day: Resurgence, which has cast Goldblum in a leading role, though he truly belongs on the sidelines, rolling his eyes and mocking the film’s heroes.

Spielberg confused Goldblum’s star power and niche appeal as evidence enough to make him the sequel’s protagonist, but his performance in The Lost World was too bogged down in main-character-style exposition to allow him any levity or off-kilter moments. Goldblum, as most fans know, is at his best when he’s turning his character’s dialogue into a strange word gumbo, wiggling his eyebrows and exploding into real emotion, seemingly at a whim.

His performance as David in Independence Day shared so much with his turn as Dr. Malcolm in Jurassic Park. Both men were exceedingly intelligent, and they played sidekick to straightforward action heroes, interacting with their stories’ women in complicated ways. Though Jurassic Park’s Dr. Malcolm is depicted as an uber-sexual, leering ladies’ man, ID4’s David is still one of Goldblum’s most earnest characters, second only to Seth Brundle in The Fly.

Compare the most heart-wrenching scene in ID4 — “I was a part of something special!” — to Goldblum’s exchanges with Geena Davis in The Fly, and it becomes clear that Goldblum needs narrative space to enact his kooky sensual chemistry. He’s not being used to his potential as a leading man in The Lost World, but is made unforgettable as a quirky sidekick driven mad by desire in, well, everything else. Although Goldblum is the romantic lead in The Fly, his odd qualities made him a perfect candidate — like Norman Bates in Psycho — for a monstrous meltdown. Seth Brundle isn’t a male hero, so much as a deconstruction of the figure.

The upcoming Independence Day sequel has been touting Goldblum as its biggest star, even inserting his face into years-old memes in possibly the most nauseating film promotion in recent memory. This tone-deaf attempt to reach young audiences, many of whom don’t remember the first Independence Day at all, speaks to an awful shift in the sequel’s construction. The original ID4 was great because it hit that early 90s sweet spot, between wry humor (Goldblum) and gooey sentiment (Vivica A. Fox, Bill Pullman). From the looks we’ve gotten at Resurgence, the film will involve quite a few explosions, some added monster design, and almost none of the humor or heart that made the original film memorable, despite the cheesy premise.

ID4 did lose Will Smith, but the film’s attempts to distract its viewers from the incredible hole in the center of its story are pretty weak. Tossing in two young male actors and two new female actors won’t do much for Resurgence, unless the overcrowded stage somehow allows Goldblum space to run his mouth. As we learned from The Lost World, he just isn’t captivating as a humorless leader of women and children, perhaps because of the viewer’s sense that they’re being cheated. Casting Goldblum as an awkward, ill-fitted group leader for the young folks in the sequel could work, if Hemsworth and Monroe were directed to treat him like an oddball relic.

It’s an overstatement to suggest Goldblum’s position in Resurgence — on the front lines, minor characters cowering behind him in a huddle — will ruin the entire film, but the fact that noted problematic creep Roland Emmerich is enacting the exact same mistake as Spielberg made in 1997 means that, for a guy directing a science fiction film, Emmerich isn’t the best at interpreting signs.