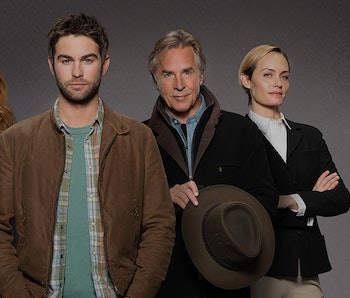 Shonda Rhimes, creator of Scandal and Grey’s Anatomy, is as good at television as Mireille Enos is bad at creating characters with mass-market appeal. Nothing against Enos, whose particular brand of magnetism tends to attract critics and repulse the big middle, but it’s unclear whether having a subtle actress play a woman with an inscrutable job, a fraud investigator, is really going to bring in the eyes. But Shonda Rhimes doesn’t play. We wouldn’t be surprised if we were surprised.

Expect Number of Seasons: This show will either be canceled mid-pilot or run until the members of the cast can’t stand the sight of each other any longer.

Ken Jeong, who was the third or fourth best thing about The Hangover and the seventh best thing about Community, stars in this family sitcom about a doctor (Ken Jeong is actually a doctor) struggling to balance his practice and his personal life. Think of it as The Mindy Project without insight but with (drumroll) Dave Foley. Remember Dave Foley? Remember NewsRadio? Remember that time Dave Foley got an ugly divorce and ran into money troubles? His agent does.

The plot — son gets kidnapped and returns to his politically connected family a decade later under mysterious circumstances — is basically Homeland meets Anne of Green Gables, but the actors here are serious. Joan Allen is Joan Allen. Allison Pill is great in things that aren’t The Newsroom. Liam James was amazing in The Way Way Back. Rupert Graves is Lestrade on Sherlock. Andrew McCarthy is apparently bored with writing features for travel magazines. Think of it as the basic cable Avengers.

Expect Number of Seasons: We’re looking at a very solid three. The slow burn is better on Netflix than on network TV so expect the show to burn through a lot of material then attempt to top itself. You can only do that for a number of seasons, and that number is three.

The Muppets have been around forever because the Muppets are great. Show a Swedish person the Swedish Chef and they’ll laugh and laugh. The Muppets are the least alienating characters ever.

Expect Number of Seasons: However many seasons until network TV dies. Maybe ten?

Look, Ray Winstone is great. The opening scene of Sexy Beast may be, by itself, the best movie made in the last 20 years. No one is more intimidating. No one plays intimidation for bigger laughs. All that said, this biblical Game of Thrones knockoff about a shepherd and a king looks ponderous. Cool ampersand bro.

Expect Number of Seasons: Two seasons. No one will expect there to be a second season, but there will be because this is clearly a boardroom idea. Some dude in a nice suit will spend winter saving this show from the sword using David and Goliath metaphors.

This drama about North Dakota wildcatting has an awesome premise and an even more awesome baddie in the form of Don Johnson, who speaks with the ambiguous drawl that says, “I haven’t left Hollywood in several decades.” It’s easy to make fun of Johnson, but he does TV kitsch beautifully so you know he’s going to try to make off with this show. The question is whether or not Chace Crawford can match his charisma. Probably not.

Expect Number of Seasons: One season followed by a spinoff that consists of Johnson sitting on a porch talking to himself and drinking moonshine. He has a dog and a wife who shouts from inside the house, but we never meet her because she doesn’t come out onto the porch.

Someone in the new, aggressively diverse class of CIA staffers is plotting a terrorist attack. Who is it? Professor Plum probably. This is a hyped-up placeholder.

Expect Number of Seasons: This show will last until ABC has a better idea (think: three years).

This story about a religious family coming to terms with itself in the wake of one son’s homosexuality feels like it could work, but might be crushed under the weight of its own morality (liberal or conservative). Irish Catholicism has created a lot of America’s best, dirtiest comedians, none of whom make jokes that ABC wants to put on television.

John Hughes and John Candy were (and are, in Hughes’s case) big talents. Mike Epps is a funny guy, but he’s not John Candy funny. Like this show’s premise, he’s too thin. The movie worked.

If this show about murder, cocaine, and music on the Sunset Strip in the dirty '80s was good, it would be on HBO or Showtime or Yahoo or Netflix or, really, anywhere that isn’t ABC.

Expect Number of Seasons: Two seasons, but only because the cast is super good-looking.