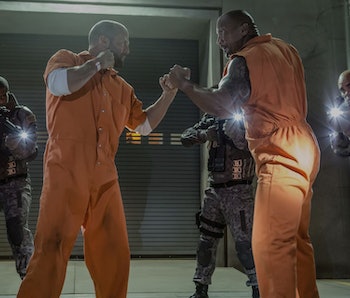 While The Fate of the Furious continues to dominate the box office in its second week, Universal Studios is reportedly pursuing a spinoff of the Fast & Furious series that will star Dwayne Johnson and Jason Statham. The two actors play enemies-turned-reluctant allies, and their well-received chemistry in F. Gary Gray’s film has clearly convinced someone with influence that they could headline a bomb-ass action movie on their own.

Although work on the untitled film is still in its infancy, Deadline says the idea is to bring together Johnson’s DSS agent (Luke Hobbs) and Statham’s master criminal (Deckard Shaw) for their own adventure while those in charge of the Fast & Furious series figure out the next installment. Chris Morgan, the head writer of Universal’s unstoppable action franchise, will pen the script.

Both Luke Hobbs and Deckard Shaw were introduced as enemies to Dominic Toretto, a street racing patriarch whose tight-knit group have taken over locales like Rio de Janeiro, London, and Abu Dhabi. Eventually, however, they’ve become allies and have been granted seats to the infamous Toretto barbecue. .Johnson’s Luke Hobbs debuted in Fast Five, while Statham’s Deckard Shaw made a cameo appearance in the post-credits scene of Fast & Furious 6 before playing the lead villain of Furious 7. In The Fate of the Furious, Shaw was reluctantly recruited to help save Dom from the clutches of the series’ new villain, Cipher, a sinister hacker played by Charlize Theron.

The Fate of the Furious is in theaters now.