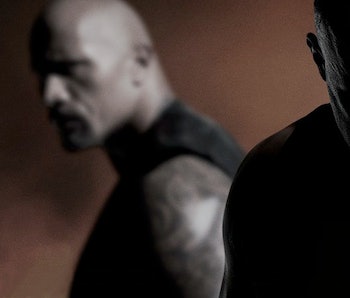 For a global movie franchise built on dope car wrecks, die-hard fans of the Fast & Furious know it best for its sentimental heart. “Family” is what Vin Diesel gruffly utters in nearly every installment of a series that’s grossed over $1 billion in box office sales. With unexpected emotional depth and earnestness in between the action, family really means something in these movies. But the newest entry, F. Gary Gray’s The Fate of the Furious, only pays lip service to the idea of family, while the actions of its characters render the interpersonal bonds these movies have earned pretty much null.

Spoilers ahead, but in short: Why on Earth is Dominic Toretto now totally cozy with Deckard Shaw?

Although Fast & Furious is synonymous with family, the nucleus of the theme didn’t start until the very end of the teen-centric third movie, Justin Lin’s The Fast and the Furious: Tokyo Drift. The death of cool-as-ice Han (Sung Kang) saw the return of a familiar face, Dom’s, because — as Twinkie (Bow Wow) puts it — “Han was family.”

Han’s death is a flashpoint for the Fast & Furious franchise. Before Han, “family” was a foggier notion that manifested in more angled ideas like trust (The Fast and the Furious) and reconciliation (2 Fast 2 Furious). But family as a fuller concept began coming into play in Tokyo Drift. Fans never saw Han before the third film, which made Twinkie’s lines vague and confusing: Han is Dom’s family? Since when? It would only be years later when audiences learned that Tokyo Drift took place chronologically far later than it seemed.

In 2009, three years after Tokyo Drift was released, Sung Kang reprised his Han in the Diesel-directed short Los Bandoleros, which led into the opening heist of 2009’s Fast & Furious. Han stayed for Fast Five in 2011 and through the end of Fast & Furious 6, when at last his death in Tokyo Drift — revealed to be a murder — was bridged to the rest of the series. The culprit? Deckard Shaw, played by Jason Statham, acting on behalf of his brother, Owen (Luke Evans), who was defeated in Fast & Furious 6. Deckard’s actions showed that Toretto isn’t the only one loyal to their family.

But what’s significant is that for seven years and four movies, a popular character’s death loomed like a shadow over a series that only grew obsessed with warmth and togetherness. With every barbecue held by Toretto, the anticipation for the inevitable became unbearable. When Han’s death and the circumstances surrounding it were finally linked, the absence of Han, his love Gisele (Gal Gadot), and not to mention the real-life loss of star Paul Walker in late 2013, injected Furious 7 with painful purpose. Furious 7 isn’t just about family; it’s about loss and the idea of who should pay for such transgressions.

So, Furious 7 happened, with Deckard Shaw getting jailed for his crimes. But now, in The Fate of the Furious, Jason Statham’s top-billing and the studio’s hunt for a charismatic lead to fill the Brian-sized hole meant a backward plot was invented to add Deckard into Dom’s team. The film goes to great lengths to make it clear that Deckard isn’t “family,” yet the film also goes to great lengths to make his fake “death” feel like a real loss. Later, when Deckard returns with Owen — another former enemy of Toretto’s — it’s played triumphantly and not in any way the nightmare that it actually is: two bad guys who cannot die. But it’s okay because they’re there to save a cute baby.

The Fate of the Furious makes a big deal about family without remembering how it formed its family in the first place. Aligning with the Shaw Brothers is one thing, but Fate could have reset their dynamic. If Dom and the Shaws ended up as enemies once again, at least they’d be even; Saving Dom’s child doesn’t make up for killing Han in cold blood. Yet Dom extends a seat to his barbecue for no reason than “IDK, he’s nice now.” This arc is teased earlier when Charlize Theron’s Cipher questions Dom why he was so casual when someone tried to kill him in Cuba. When Dom just shrugs it off, it’s troublesome to think this franchise is actually as lunkheaded its critics make it out to be.

The Fate of the Furious is in theaters now.