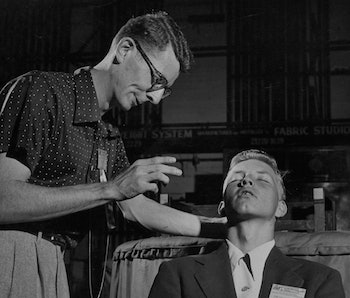 Some argue that hypnosis is just a trick. Others, however, see it as bordering on the paranormal — mysteriously transforming people into mindless robots. Now our recent review of a number of research studies on the topic reveals it is actually neither. Hypnosis may just be an aspect of normal human behavior.

Hypnosis refers to a set of procedures involving an induction — which could be fixating on an object, relaxing or actively imagining something — followed by one or more suggestions, such as “You will be completely unable to feel your left arm.” The purpose of the induction is to induce a mental state in which participants are focused on instructions from the experimenter or therapist, and are not distracted by everyday concerns. One reason why hypnosis is of interest to scientists is that participants often report that their responses feel automatic or outside their control.

Most inductions produce equivalent effects. But inductions aren’t actually that important. Surprisingly, the success of hypnosis doesn’t rely on special abilities of the hypnotist either — although building rapport with them will certainly be valuable in a therapeutic context.

Rather, the main driver for successful hypnosis is one’s level of “hypnotic suggestibility.” This is a term which describes how responsive we are to suggestions. We know that hypnotic suggestibility doesn’t change over time and is heritable. Scientists have even found that people with certain gene variants are more suggestible.

In this group, suggestions can be used to disrupt pain, or to produce hallucinations and amnesia. Considerable evidence from brain imaging reveals that these individuals are not just faking or imagining these responses. Indeed, the brain acts differently when people respond to hypnotic suggestions than when they imagine or voluntarily produce the same responses.

Preliminary research has shown that highly suggestible individuals may have unusual functioning and connectivity in the prefrontal cortex. This is a brain region that plays a critical role in a range of psychological functions including planning and the monitoring of one’s mental states.

For example, when given a suggestion to not experience pain, they may suppress the pain but not be aware of their intention to do so. This may also explain why they often report that their experience occurred outside their control. Neuroimaging studies have not as yet verified this hypothesis but hypnosis does seem to involve changes in brain regions involved in monitoring of mental states, self-awareness and related functions.

Although the effects of hypnosis may seem unbelievable, it’s now well accepted that beliefs and expectations can dramatically impact human perception. It’s actually quite similar to the placebo response, in which an ineffective drug or therapeutic treatment is beneficial purely because we believe it will work. In this light, perhaps hypnosis isn’t so bizarre after all. Seemingly sensational responses to hypnosis may just be striking instances of the powers of suggestion and beliefs to shape our perception and behaviour. What we think will happen morphs seamlessly into what we ultimately experience.

Hypnosis requires the consent of the participant or patient. You cannot be hypnotized against your will and, despite popular misconceptions, there is no evidence that hypnosis could be used to make you commit immoral acts against your will.

Meta-analyses, studies that integrate data from many studies on a specific topic, have shown that hypnosis works quite well when it comes to treating certain conditions. These include irritable bowel syndrome and chronic pain. But for other conditions, however, such as smoking, anxiety, or post-traumatic stress disorder, the evidence is less clear cut — often because there is a lack of reliable research.

But although hypnosis can be valuable for certain conditions and symptoms, it’s not a panacea. Anyone considering seeking hypnotherapy should do so only in consultation with a trained professional. Unfortunately, in some countries, including the UK, anyone can legally present themselves as a hypnotherapist and start treating clients. However, anyone using hypnosis in a clinical or therapeutic context needs to have conventional training in a relevant discipline, such as clinical psychology, medicine, or dentistry to ensure that they are sufficiently expert in that specific area.

We believe that hypnosis probably arises through a complex interaction of neurophysiological and psychological factors — some described here and others unknown. It also seems that these vary across individuals.

But as researchers gradually learn more, it has become clear that this captivating phenomenon has the potential to reveal unique insights into how the human mind works. This includes fundamental aspects of human nature, such as how our beliefs affect our perception of the world and how we come to experience control over our actions.

More like this
Mind and Body
Jan. 21, 2023
Procrastination study suggests a link to shoulder pain, bad sleep, and more
By Eva Skillgate, Alexander Rozental, Fred Johansson and The Conversation
Gaming
Jan. 15, 2023
Do video games make you smarter? One surprising genre leads the rest
By Richard E. Mayer and Knowable Magazine
Mind and Body
Jan. 15, 2023
Study reveals one brilliant brain hack that can unlock your creativity
By Lily Zhu and The Conversation
LEARN SOMETHING NEW EVERY DAY.
Related Tags
Share: