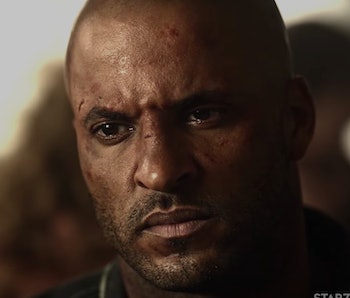 Shadow Moon, the protagonist of Neil Gaiman’s novel American Gods, spends most of the story confused and disoriented. That’s why a newly released trailer for the impending television adaptation features footage from the show interspersed with the actors explaining this sweeping, often abstract plot.

The plot follows Shadow Moon, played by Ricky Whittle, as everything in his life turns upside down. He’s released from prison, finds out his wife has died, gets a weird new job as a bodyguard for a con man named Wednesday (played by Ian McShane) and embarks on an even weirder road trip across America with that con man.

In the clip, Whittle, Bruce Langley (who plays Technical Boy), Neil Gaiman, and showrunners Bryan Fuller and Michael Green explain the cosmic scope of this world. The purpose of Wednesday and Shadow’s road trip is to set up a brewing war between old gods Americans have stopped believing in (like Odin and Anubis) and new modes of national worship like technology. The setting mixes the magic with the mundane: dirty roadside motels and magic coins and talking birds; highways and diners and talking buffalos. It’s fantasy, but it’s a far cry from the world of Game of Thrones.

In short, it’s a fascinating story but not exactly an easy three-sentence explanation. But luckily, this new teaser has it handled.