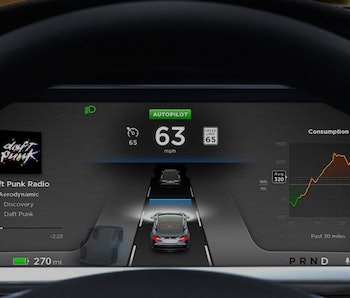 Tesla’s semi-autonomous Autopilot system allows a car to drive autonomously along highways and other limited scenarios using a series of sensors. In the future, it will be upgraded to support full autonomous driving from A to B. It’s easy to hear those things and think, “yeah, sure, sounds good,” but how does it actually work? Fortunately, used car website Instamotor has produced a handy infographic to explain to visitors how exactly these systems work.

Advanced Driver Assistance Systems, or ADAS, is the technical term for systems like Autopilot. It’s not just Tesla offering features like these — Ford is also developing semi-autonomous systems, and companies like Waymo, Volkswagen, and AutoX are using those same sensors to develop fully autonomous systems. Primarily, Tesla uses an advanced Nvidia Drive PX 2 computer to pull together data from multiple sources to map the world.

As more cars enter the used market, Instamotor wanted to clear up some misconceptions about ADAS. Unlike level four or five autonomy, where the driver can expect to take their mind off the road and relax, semi-autonomous systems require the driver to stay fully alert and take over when needed. That can be confusing for consumers that read “autopilot” and think it refers to a more autonomous system.

“We’ve seen within our own user base that many people don’t fully understand how having ADAS will impact their car or overall driving experience,” Val Gui, co-founder and COO of Instamotor, tells Inverse. “With words like ‘autopilot’ and ‘autonomous’ becoming a part of the language manufacturers are commonly using today, we hope to educate and inform consumers of the differences as they look to purchase a car.”

Here’s how many ADAS systems on the market work:

While self-driving cars are expected to reach roads around 2021, more semi-autonomous systems are expected to pop up in more used car dealerships. It’s vital that consumers understand their limitations.