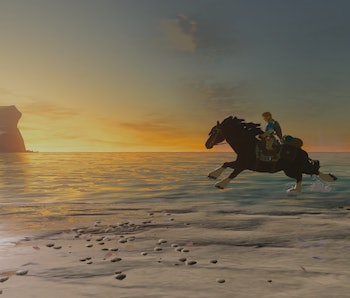 While registering my amiibos with the Nintendo Switch to snag a couple of outfits for Link in The Legend of Zelda: Breath of the Wild this past weekend, I stumbled across something I haven’t seen on Nintendo’s eShop for awhile: a complete season pass with plenty of promised content for the latest entry in the series. I’ll never hesitate to mention how highly skeptical I’ve become of the season pass structure so prominent in the video game industry these days, but I’ll admit that one of the DLC packs mentioned in Breath of the Wild’s expansion pass intrigued me with the introduction of a “Hard Mode” set to come out on August 31.

At this point, Nintendo has yet to officially release any details regarding the content of either Breath of the Wild DLC pack, but the idea of having a more challenging experience with added depth is a concept many Zelda fans are already getting behind. On the surface, Breath of the Wild is essentially a causal survival experience from a mechanical standpoint, built around the core concept of exploring the world for resources, powers, and equipment to then use them to continue your quest of … exploring the world for resources, powers, and equipment. Sometimes you’ll be able to use your gathered resources to push ahead towards Ganon in one way or another, and other times you’ll encounter the equivalent of a brick wall.

What’s important about the survival elements present within Breath of the Wild’s core gameplay loop is that there is room to make the experience more challenging for the player, which is what many fans are hoping Nintendo does with the game’s planned Hard Mode DLC in May.

Unlike Fallout 4’s infamous survival mode or The Division’s multiplayer expansion survival, Breath of the Wild isn’t a game that severely punishes you for your mistakes. Instead, it encourages you to leave how the various mechanics at play work within the game’s gigantic world. Naturally, this design choice only goes so far. While I understand why the development team limited the survival aspects for the sake of accessibility, I can’t help but wonder how Link’s latest adventure would play if you had to worry about eating food to avoid starvation or if you could only save your game while resting.

Introducing a whole new level of challenge for players interested in a second run through Breath of the Wild’s 100-plus-hour campaign with a set of survival mechanics cranked up just makes sense, especially considering that the foundation has already been laid out. In the base game, you’re already required to hunt animals for food, gather various plant life to combine into a host of dishes, and consistently collect weaponry to fight off your enemies with since each weapon is breakable. And let’s not forget the need to balance how hot or cold Link is in Hyrule’s various biomes, which can prove to be quite the challenge if you don’t come prepared.

In a survival-centered hard mode for Breath of the Wild, we’d likely see all these mechanics ramped up to a whole new level. Resource scarcity would become a serious issue. Meanwhile, cooking meals would result in fewer benefits and heart restoration properties. Plus, you’d have to eat to avoid starvation, making a consistent supply of low-level food a necessity. Weapons would break much quicker too, making rare weapon types such as Knight or Royal much more valuable due to the higher durability, thus changing how you approach weapon collection entirely. Additionally, it would be great to see a limited amount of saves too, requiring players to rest at an inn or self-made bonfire to save their progress.

The goal here wouldn’t necessarily involve making the enemies, bosses, or unique encounters more difficult by increasing their health and damage numbers, but to emphasize resource management by making everything you collect that much more valuable. Not only would a survival-based difficulty help remove the equipment cap you eventually reach in Breath of the Wild where many materials, weapons, and armor pieces become irrelevant, but it would add a layer of strategy currently lacking from Breath of the Wild. Many players are already upping the ante with challenge runs and individually-enforced limitations. Why not make it official?

Unfortunately, we won’t know what Nintendo’s plans are in detail until later this June. But until then, we can just continue doing crazy things in Breath of the Wild to practice for whatever challenges Hard Mode might bring.

More like this
Gaming
6.17.2022 1:00 PM
Absurd Breath of the Wild 2 theory may reveal Link's newest challenge
By Robin Bea
Gaming
18 hours ago
Everything you need to know about Dragon Quest Treasures
By Robin Bea
Gaming
16 hours ago
Here's exactly how long it takes to beat Fire Emblem Warriors: Three Hopes
By Joseph Yaden
Related Tags
Share: