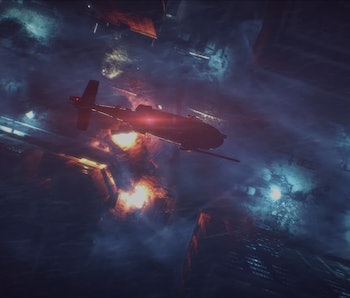 When Ubisoft’s The Division released earlier this year, the game had an interesting narrative premise built into a looter-shooter not too different from the competition. Players were encouraged to work their way towards max level only to spend countless hours grinding content and collecting gear to build their character. Players started to hit a wall in The Division that limited your experience due to a lack of content. The game’s expanded since then with DLC like Underground, and now Survival. And here’s the thing: Survival is now the only way The Division should be played.

See, unlike Underground, Survival is an entirely different experience from the base game. The new mode strips you (and every other player) of your abilities, equipment, and weapons to send you on an extraction mission into the Dark Zone. Your goal? To retrieve experimental antivirals that have just been located during an apocalyptic snowstorm.

As the mission starts, you’ll board a helicopter and head into New York. On your way to the Dark Zone, however, the snowstorm ends up taking you down — stranding you and 24 other players downtown without any assistance. You’ll start with nothing but a basic pistol and torn hazmat suit too, which means you’ll be at a serious disadvantage compared to the various NPCs scattered about the city.

Each round of Survival follows this basic premise, spawning you in a random safe house scattered about the entire in-game map. Here, you’ll find a handful of supplies you can use for crafting new equipment and some medical supplies for keeping your infection suppressed. Unlike the base game, you’ve also got a few new mechanics to worry about too.

Your primary concern is infection, which slowly starts to tick down from a timer of one hour. When the clock runs out, you’ll die regardless of the situation — and you can only delay the inevitable until you successfully extract from the Dark Zone with the antivirals. You’ll have to collect food, water, and other consumables to keep yourself in tip-top fighting shape too. Oh, and keep yourself warm by crafting or finding clothing that prevents you from freezing to death.

These added survival mechanics are supplemented with the fact that, at any time, one of the other 23 players can find and kill you to take all your collected supplies, weapons, and equipment for themselves. This piece, taken straight out of the original Dark Zone in The Division combined with all the survival mechanics of DayZ, makes Survival the absolute best way to play The Division from here on out.

Survival turns the threat of death into something very unlike the base version of the game; it turns it into something genuinely threatening. You can die a myriad of different ways and lose everything you’ve accumulated in a matter of seconds if you don’t check your corners or come to a firefight properly prepared. NPCs are now considered dangerous encounters you can’t just throw yourself into repeatedly, and players finally feel like the threats they were meant to be.

Instead of creating a new narrative with the second expansion, Massive essentially built a survival platform located in the giant sandbox of New York City. Here, we as players get to create our own stories with each other while trying to survive the dangerous environment that New York should have been within The Division in the first place. Because of this change in design, every single match of Survival feels drastically different than the one before it.

During my time with Survival, I’ve come across players who will chase me to the ends of the map collecting scraps I leave behind. I’ve met players who will team up with me to kill a group of rare NPCs too, only to then turn on me for the gear they dropped. No matter how we interact, I don’t know if other players are friendly or hostile, and those very interactions are some of the most meaningful ones I’ve had at all in the game.

Even though Survival isn’t the same as a total DayZ-like conversation that many have been hoping for, the constant threat of death and capacity for truly memorable player interactions make the mode the best experience the game has to offer. So, if you’ve been looking for a reason to give The Division another shot, Survival is definitely the expansion you’ve been waiting for.

Expansion II: Survival is available now on Xbox One and PC for $14.99 or as part of the season pass. The PS4 release is currently set for December 22.