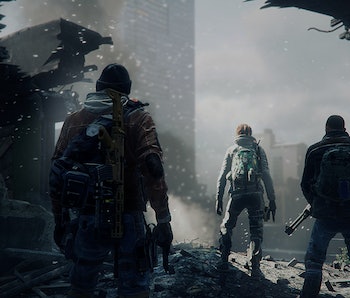 Ubisoft’s newest release has been doing quite well this week, bringing in hundreds of players and breaking sales records for the company.

At its core, The Division is poised to be a great multiplayer title for months to come. The story isn’t half bad, the core mechanics are teamwork-oriented and the world is filled with activities for players while they build their characters. Like any persistent multiplayer title, though, The Division needs some work. Here’s a few things we at Inverse feel should be addressed or added in the coming months.

Accessible through the Forward Operating Base, the player stash is basically the only place where you can store gear. Similar to Destiny, The Division encourages different builds and playstyles though gear – which means players need a place to store it all. Unfortunately, the player stash only allows 40 items total and players are using it up all too quickly. Since The Division has a major focus on loot, it’s important to increase this stash size to something more substantial, by adding 30 slots for each category of gear — or adding more space overall.

The Ability to Examine Other Players

As a loot-based game in a multiplayer world, The Division urges you to evaluate other players’ loadout and abilities, but that feature is entirely absent from the game. You cannot see other players’ gear, weapons or abilities. Countless times, I’ve wanted to analyze my friend’s newest assault rifle, only to be disappointed — because I have to settle for his explanation. Sharing information about your gear is paramount to a game this involved on loot.

The Ability to Lock Inventory Items

While it may not be a complicated request, the ability to prevent the accidental deleting of equipped or favorite items from the player inventory would go a long way. Since launch many players have brought up the complaint that they cannot lock their items within the inventory so that they don’t accidentally delete them when disassembling all of their gear for crafting materials. It’s happened on more than one occasion for me personally and a lock feature would be a simple fix for the issue many players are experiencing.

Crafting in The Division is a key element with materials and blueprints being rewards for numerous side quests and individual exploration. While running around players are always collecting materials, but for the high-end weapons top tier materials are required – which you get from drops or combining lower tier materials. The only problem? You can’t combine more than one at a time and that results in spending a decent chunk of time you’ll lose crafting. By adding a ‘craft all’ button, this issue could easily be resolved.

A Clan or Guild System

In The Division playing with a team is highly encouraged, especially when it comes to the highest level content currently available in the game. At the moment there’s no official clan or guild system for players to band together within the game and identify themselves as a group. While it may not fit directly into The Division’s story, it could go a long way in helping players find others to game with and complete various activities in the game without actually leaving to visit a page like reddit to find fellow players. Granted, The Division does have dedicated forums and integrated matchmaking but it looks like it isn’t helping to develop dedicated group communities within the player base the same was a clan or guild system typically would.

At the moment, the endgame for The Division is leaving something to be desired – with a few daily missions a day and the Dark Zone there to keep players busy. While we’ve already addressed some of the issues with the Dark Zone here on Inverse, we haven’t had a chance to discuss the current endgame state of PvE. As it currently stands, PvE players have access to three missions a day: two hard difficulty missions and one challenging difficulty one. Both missions provide gear drops and Phoenix Credits as a reward, which are used to purchase some of the best gear currently available within the game.

The main issue currently lies within the challenge difficulty mission for players – many of whom consider the mission far too difficult to complete with their current gear. For the past few days, I’ve personally been unable to complete the challenge missions with a complete group of players which has stopped me from getting my hands on additional top tier gear and Phoenix Credits – and I’m not alone. Many players have shared this same complaint and are wondering how to gear up for the first Incursion launching in April, which are akin to Destiny’s raids. Sure, it’s safe to say that these challenge missions will get easier with better equipment, but when the only way to get equipment currently lies behind the Dark Zone and the challenge missions? It seems a bit convoluted. Granted, The Division has a long way to go before we can truly assess the endgame content, but at the moment a few difficulty changes could go a long way.

More like this
Mind and Body
6.15.2022 12:00 AM
The right time to make a decision may depend on this overlooked biological factor
By Jocelyn Solis-Moreira
Innovation
6.27.2022 9:28 PM
The 6 best MacBook Pro stands
By Vanessa Spilios
Innovation
6.19.2022 6:04 PM
47 popular home upgrades people are making that are under $35 on Amazon
By Christina X. Wood
Related Tags
Share: