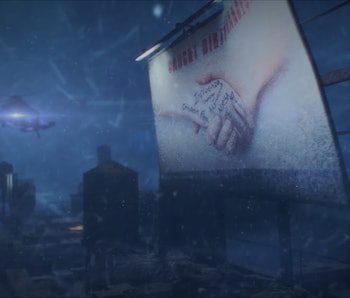 The development of survival mechanics for titles focused on character progression like The Division and No Man’s Sky, which originally launched to a mixed reception from their respective player bases, has become much more prevalent. No matter the degree of detail, the basic idea remains the same: Provide players with a fresh way to experience games they previous felt they had completed. By stripping all of that progress away and forcing players to make decisions with more consequences than a simple respawn, survival modes are challenging players — and that’s a good thing.

The character progression is a gameplay element that’s been around for years. Seemingly no matter the project, the goal has always been to give players a reason to work through all the content to obtain better equipment that they can then use to make their own character stronger to work through more of the game. This, in turn, can make previously available content a breeze.

But what happens when you strip the security of improving your character’s equipment, weapons, skills, and abilities without consequence? You get an entirely different experience that’s filled with tension and worth playing continuously even if you must start over from scratch after each death. Sure, some form of “content wall” may still exist, but it’s one that has significantly more meaning once you finally end up reaching it.

Take The Division for example, which released in March 2016. Initially, the leveling experience was stellar with an entire world to explore. You fought in the open world to complete loads of missions and side objectives, which in turn would award you with experience and better equipment for your character. Once you hit max level, however, you were limited to re-running missions you already completed for a chance to obtain better equipment, a constant cycle that lasted longer than it needed to.

Over time, this cycle was mended as Ubisoft continued to release additional content for players while fixing many issues like Dark Zone hackers and bullet sponge-like enemies. At that time, they’d already lost a large portion of their player base despite releasing the games first major expansion Underground — which just added some interesting dynamic encounters and modifiers to the loot grind. It held up well, but didn’t do anything to remove the eventual wall.

Thankfully, the game’s second expansion Survival feels unlike anything else in the base game. When it first hit public testing servers on PC, it immediately started to kick the game’s popularity back up. A few weeks later, after some rigorous changes following testing feedback, Ubisoft released Survival on PC and Xbox One to an excited group of players looking to get back into the game alongside those who had been playing from the beginning.

The premise of Survival is relatively simple. You go down in a helicopter crash with fellow agents during a massive blizzard which is blanketing New York City. Stranded and infected with a deadly disease, you’ve got to explore the city and obtain loot scattered about to survive long enough for extraction in the Dark Zone. Doing that is more complicated that it sounds, and it uses many of the underutilized mechanics of The Division’s base experience into play.

In Survival, every piece of food matters, every weapon you find becomes a valuable commodity, and every single enemy you come across could end your life in an instant. Suddenly, everything you previously didn’t worry about becomes dangerous, forcing you to balance a series of small tasks with fighting for extraction, and you start to make decisions based on your personal survival instead of your gear score.

The survival modes added to The Division and No Man’s Sky change the way a player approaches a game’s basics, namely thanks to the consequences they place on certain player actions. Running out in the middle of an open area packed with enemies isn’t just something you can come back from anymore, and neither is jumping off a cliff without a jetpack to slow your fall. While they certainly don’t fix every single issue behind a game, these types of consequences on player action work to create a more meaningful experiences, the kind we hope continue to fuel the trend well past 2017.