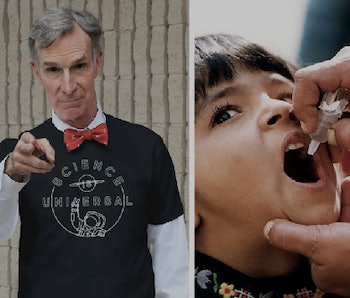 In the very first episode of his new Netflix series, Bill Nye straps himself to a car seat to illustrate that vaccines act as a safety mechanism. In a later attempt to appeal to narcissism, he gets pelted by balls while wearing a velcro suit to demonstrate how other people getting vaccines actually protect a person; to not get vaccinated, he says, is both a product of selfishness and willing ignorance.

It’s true that Bill Nye is here to fight the good fight — after all, he’s returned to our screens to save the world. But vaccines have long been proven to be safe and important in the fight against disease.

In his explanation of how vaccines work and why they’re needed, Nye casually drops a concept called “the paradox of protection.”

“If everyone around you is vaccinated, indeed, there is less chance that a troublesome germ will infect you,” Nye explains in the episode. “So you think, ‘Hey, I don’t need to get vaccinated.’ But what if a big, bad, tiny germ infects you? There’s an excellent chance that germ will mutate into something new. Then our current vaccine will no longer work against this new disease that you helped create.”

The hypothetical vaccine-resistant person Nye describes is exemplary of what the paradox of protection means here, according to a 2013 paper by Dr. Harvey Fineberg at Harvard’s School of Public Health, where he illustrates the paradox. No one wants to get ill, and almost everyone agrees that people should do everything in their power to keep from falling ill.

But herein is the paradox: No one wants to be sick. There’s a solution to not become sick (i.e., vaccines). Yet, people choose not to allay this basic human instinct

Why does this happen? Fineberg explains in JAMA that prevention is a “difficult sell”: The success of a vaccine is invisible, the statistics of what could happen doesn’t cause an emotional effect, and there’s a long delay before a reward may appear. If everyone is vaccinated, then no one sees the repercussions of not being vaccinated, and the threat that you want to avoid becomes seemingly less scary.

Nye touches on this idea twice in this episode. In India, a man who has suffered from polio explains to correspondent Emily Calandrelli that he felt if more Americans actually saw the effects of polio, they would understand the necessity of vaccines. Later, a professor of sociology explains to Nye that her studies of anti-vax parents show that many parents are suspicious of vaccines simply because they haven’t seen it in their lifetimes.

But don’t confuse the paradox of prevention with another concept, Hoskin’s Paradox, a theory developed in the 1970s by Dr. L.W. Hoskins which argued that “annually repeated vaccinations would not confer protection against epidemic influenza in the long-term.” He was eventually debunked — the data here turned out to be flawed — but a quick Google of the term often brings it up in connection to the paradox of prevention that does advocate for vaccinations.

But back to the paradox of prevention: Falling into it means people fall into herd immunity, where most members of a community are immunized against contagious diseases, which in turn protects the members of the community who can’t become vaccinated themselves because they are either too young, pregnant, or immunocompromised. These people are protected from becoming ill because those around them have taken the necessary step to get vaccinated.

However, when more and more members of a community don’t get vaccinated, then the herd immunity can fall away. This was demonstrated when measles outbreaks occurred in Ohio and Texas in 2014, and later in California in 2015. Too many people in the same community chose not to have their children vaccinated, which put the community at whole in danger.

“Healthy people who choose not to get vaccinated, what are they thinking?!” Nye exclaims at the end of his show’s premiere. “I implore you to get vaccinated. Let’s make vaccines cool, a badge of pride.”

Bill Nye Saves the World is streaming on Netflix now.