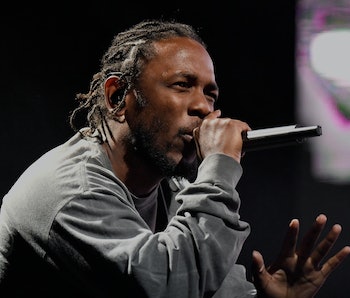 Kendrick Lamar’s new album, DAMN., is here. The 14-track follow-up to his last studio album, the masterful To Pimp a Butterfly, officially came out on Friday, April 14 — though it leaked the previous night. Here’s how you can listen to it.

K. Dot teased the album late last month when he unveiled a new song, “The Heart Part 4.,” which closes with the lyric “y’all got ‘til April the 7th to get y’all shit together.” Well, it took just a little bit longer than that, but now you can stream DAMN. on all the usual suspects: Spotify, Apple Music, and Tidal.

“Donald Trump’s in office. / Qe lost Barack and promised to never doubt him again,” he raps. “But is America honest or do we bask in sin?”

The second track, “DNA.,” is emerging as a frontrunner for the best track on the album — it’s certainly the biggest banger.

Stream DAMN. below or look for it on one of the other streaming services.