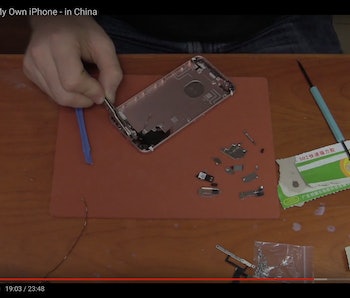 Scotty Allen, a Silicon Valley engineer-turned-DIY craftsman, built an iPhone 6s out of spare parts he bought from markets in Shenzhen, China. The shopping trip/scavenger hunt/experiment took him about two months and cost a hell of a lot more than the store-bought version. But he totally succeeded — and filmed the whole process.

Shenzhen is home to Huaqiangbei, an enormous electronics market, located near Foxconn’s manufacturing plants (where many Apple products are made). Among other things, Huaqiangbei sells spare and recycled parts from iPhones.

With the help of a translator, Allen bought all the parts he needed — and then some — for a complete iPhone. He spent about $300 on the pieces that went into the final product and about $1,000 on the extras and tools. Apple’s iPhone 6s is $549; Allen’s is already more than twice as expensive, so this maybe isn’t a feasible project for folks at home to try. Plus you’d also need to pay for, you know, a plane ticket to China.

As Allen explains, the four basic parts of an iPhone are the back/shell; screen; battery; and logic board, which is basically the equivalent of a motherboard in a computer. There are also tons of smaller parts, including the back and front cameras, the headphone jack, brackets, screws, and plastic inserts that make the buttons “click.”

He visited a laser engraving booth, a solderer, and other mechanics who helped him get the various components ready for assembly. But then he did the actual construction himself (beginning at around 15:30 in the video below).

After a couple missteps and second tries, Allen succeeds in creating an iPhone that’s good as new. It even has working Touch ID, a fingerprint sensor that unlocks the device.

Allen was impressed with both how easy it was to assemble the phone, and also how well-suited the parts were to recycling. “I never really thought much about what happens when I get rid of a phone, recycle it, or donate it,” he says in the video. “I think a lot of them end up here, taken apart for parts or turned back into nice, working phones.”

“I’m really impressed by Apple’s engineering,” he continues. “It’s so easy to repair and recycle these phones. I gotta think that Apple’s really proud of the fact that their phones don’t really end up in landfills. But there’s also credit due to the many thousands of people here who have figured out how to turn trash like this back into beautiful, working phones.”