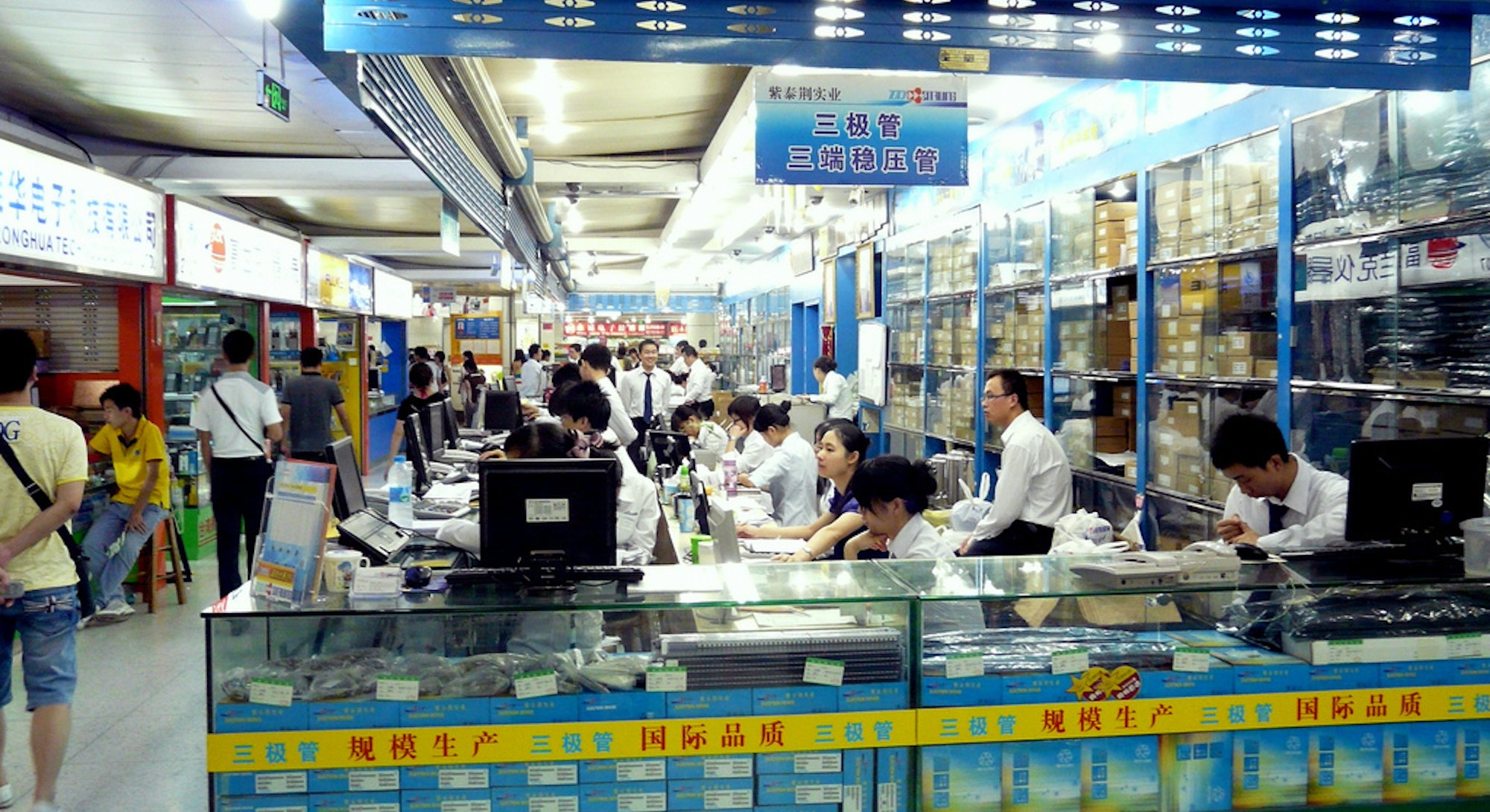 The SEG Electronics Market in Shenzhen, China, is eight stories of pure energy and commerce. It occupies the top spot in the world for hardware fiends and designers, whose idea of heaven is having an infinite number of choices for which small, internal screw to use in their latest device.

Andrew “bunnie” Huang, a prominent hardware hacker and open-source manufacturing advocate, first traveled to China in 2006. He started making regular trips, but it wasn’t until the following year that he finally went to the sprawling marketplace. “I’d always gone to these factories and met these factory guys, and this one guy was like, ‘you should really probably check this place out, it’s pretty interesting,’” Huang tells Inverse.

“What could be there?” Huang thought.

He was hesitant, in part because his Chinese was bad at the time. Although his parents are from China, he grew up in the United States, and, as he outlines in his new book, The Hardware Hacker, his parents wanted him to learn English without a trace of an accent. Despite his initial reluctance, Huang, who now lives in Singapore, made his way to the 71-story skyscraper that houses the electronics market.

The trip was part of Huang’s overall mission to teach himself about the seemingly infinite ecosystem that is the manufacturing industry in China. He hoped to take his philosophy of radical transparency in hardware design, and apply it to purchasing parts at scale. Huang’s first chance to test his ideas was in 2006 with Chumby, which he describes as a “wifi-enabled content delivery device.” Six years later, he began a project to build an entirely open source laptop, Novena, and then moved on to create flexible “circuit stickers” called Chibitronics.

Huang has always been fascinated with technology, but his time spent disassembling and modifying electronics is also motivated by a deep-rooted philosophy of transparency. “If we allow technology to become a black box, we also surrender our agency to the companies and governments that produce and regulate the black boxes,” he writes in his book.

When asked about that line, Huang offers this example to Inverse: “You take a person today and you put them in the city without a cell phone, they’re just lost,” he said. “They have no idea what to do without being able to call an Uber or get a map [with GPS]. Young kids these days, kids don’t know what a pay phone looks like.”

That vulnerability is what Huang calls “a single point of failure.” It creates an unhealthy dependence on our devices — and the companies who create them.

Hardware hacking is to vital to privacy because it’s a way to create transparency. It can enhance a device’s normal use, or make it capable of performing hidden, unintended functions. It’s also a way to extract secrets or gain access to a machine without a software hack. Huang is a big fish in this world.

Importantly, hardware hacking solves that “black box” problem. While the inside of a smartphone is something many never see or think about, Huang’s obsessed with what goes on behind the screen. If more people knew how their phones worked, they wouldn’t be as susceptible to corporate or government snooping that’s in the interest of profits or warrantless surveillance.

It doesn’t even occur to most people that there may be alternatives to balance the scales.

“You surrender all of that power and that knowledge to the corporations and the governments who provide this technology to you,” Huang says. “I think it’s a very dangerous outcome in the long term.”

Huang’s first book, Hacking the Xbox, became a cult favorite, and a go-to resource for those who see a piece of electronics and think to themselves: I wonder what else that thing can do? After his original publisher backed out for fear that the book violated digital copyright laws, Huang released Hacking the Xbox for free, and a memorial to late friend, Aaron Swartz, an open information activist who committed suicide after facing 35 years in prison over the releasing of academic journals to the public.

Huang’s stature in this field, and his commitment to privacy rights, meant that when former NSA-contractor Edward Snowden wanted a design for a device to help protect journalists from surreptitious government spying, he knew who to ask.

Huang and Snowden soon released their design for an anti-surveillance smartphone shell. As was widely reported at the time, their device, which resembles a cell phone case, would alert the user if their phone was transmitting signals, despite the phone being in airplane mode or switched off. “We all agree that when it’s in airplane mode nothing should come out of the radios,” Huang says. “What if we could see if something came out of the radios?”

Here’s the design they presented, though Huang tells Inverse that the actual version will look somewhat different:

Before he got started on the phone case, Huang wondered if someone could create an entire smartphone with open-source code, but decided it’s just not feasible. “Having thought about this problem a lot, and having tried to build very open systems that are inspectable, I’ve come to realize it would take a hundred lifetimes for an individual to inspect everything inside a smartphone,” Huang said, sounding resigned to this unhappy conclusion.

The technology was too complicated, and outsourcing all the information could introduce new risks. “Even if you had fully open-source code for everything, its not something that fits in one person’s head,” Huang says. “At which point you’re going to a panel of experts, and then you’re into this problem of, well what if I don’t trust all these experts?”

Those risks meant Snowden and Huang had to acknowledge the reality that an open-source smartphone wasn’t going to happen.

“I was like: ‘look, if you’re up against a state-level adversary, who can spend infinite amounts of money and get huge teams of hackers doing these sorts of things’” — as Snowden very much is — “‘what the fuck do we do?’” Huang recalls.

They had to get creative. The smartphone case design debuted in July. Huang is currently building a prototype, but don’t expect to see it on the shelves any time soon. There’s no plan for mass manufacturing the devices, according to Huang.

Still, the SEG Electronics Market is the place to go to look for the components to make just about any device Huang can imagine. He laughed as he recounted his first experience at SEG, as he began to grasp the magnitude of what he was looking at.

“You sort of look around and see, like, a window over there, and there’s like, like tapes and reels of components and like screws and stuff like that, and then I walk into this antechamber,” he said. “I’m like, ‘holy shit, like, there’s every kind of screw here.’” But that was just the beginning. “And then I walk a little further and it turns into the main floor, and I’m just like: ‘what the fuck is going on? Everything was there. It was so overwhelming.’”

“It’s like a mosh pit where people are trying to do business,” he said.

The Hardware Hacker is out December 2.