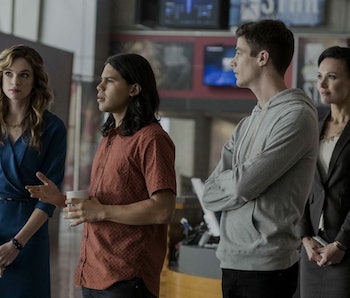 Season 3 of The CW’s The Flash has presented more questions than answers ever since its Flashpoint-focused introduction back in 2016. On a show that’s frequently employed face-swapping, hidden identities, big reveals, and too many speedsters to keep up with, it thrives not only on amping up the speed, but on lingering questions.

This season has largely involved the fallout from Flashpoint, which not only unleashed a new version of the Reverse-Flash upon the Arrowverse to wreak havoc on Legends of Tomorrow, but it also drew the ire of the alien Dominators for the “Invasion!” crossover event and gave the new big bad speedster Savitar a chance to find a way in.

The most recent episode introduced Abra Kadabra, a magician from the 64th century who had knowledge of Savitar’s true identity, information Barry had hoped to use. Though things don’t work out according to plan, Barry makes plans to visit the future, and Caitlin transforms fully into Killer Frost. So, other than “What else could possibly go wrong?” here are the 9 questions we have about The Flash while it’s on hiatus before it visits 2024 on April 25.

Will a Rogues’ Gallery Team-Up Ever Happen?

Mirror Master and Top are set to return to the show when Barry heads to the Central City of 2024, where the pair will be the Kingpin and Queen(pin?) of the town. A lot of classic Flash-related comics villains have made their way onto the show, but other than the odd pairing, there’s been almost no larger-scale team-ups. Will Mirror Master and Top reconnect with a future version of Captain Cold perhaps? Or will they have any potential Rogues in their employ?

Will Killer Frost Have to Be Killed?

Poor Caitlin’s powers come with far more than just the ability to freeze things and make it snow on a warm Christmas. She absorbs thermal energy at pretty insane rates, so insane in fact that it drives her insane in the process. That’s why her alter-ego is aptly named “Killer Frost.” So far, they’ve developed devices that can stifle her powers, but after Julian removed said device in the most recent episode to basically bring her back from death, she transformed back into Killer Frost for what might just be the last time. Will she have to die for this problem to be fixed? It would be sad to see Danielle Panabaker’s Caitlin Snow leave the show, but the whole Killer Frost fear has been a little bit too drawn out. The Flash — and the Flash — will have to do something about that by the end of the season.

What’s the Deal With Jesse and Wally?

Perhaps one of the best relationships on the show is at an impasse. With Jay Garrick locked in the Speed Force, Jesse is left to defend his Earth, leaving Wally to wallow in the trauma he endured during his own time there. Wally was oddly sidelined in the previous several episodes, and all of his encounters were defined by feelings of fear and timidness. How will the show resolve Wally’s seeming PTSD, and what will it mean for his relationship with Jesse?

What’s Going to Happen to Jay?

When we last saw Jay Garrick, he was gallantly sacrificing himself to stay in the Speed Force to replace Wally, who had replaced Savitar in the speedster prison. Some future version of Barry had created it to house Savitar, but we don’t know the how or why. For Wally, it made him relive the worst moment of his life: the moment his mother died. We don’t know how long Jay will have to wait in there. It’s entirely possible Team Flash will just forget about him, and he’ll wind up becoming Savitar.

Is That New Costume Barry’s or Future Barry’s?

Much has been said about the new costume that’s on display in promos for the next new episode. It’s remarkably similar to the one Barry has worn all this time, but with some extra flashy (hehe) golden trim and what seems like a darker shade of red. The real question is: Is this dapper new suit a fresh acquisition of our Barry, or will it be worn by the emo-haired Future Barry?

Will We Finally Learn What Crisis 2024 Flash Vanishes From?

In the next episode, “The Once and Future Flash,” Barry goes to the year 2024 hoping to find more information about Savitar. That episode also airs on April 25. And, what do you know, the date on this ubiquitous newspaper clipping is April 25, 2024. This newspaper clipping has been important since the early days of Wells-Reverse-Flash-Thawne keeping tabs on the future and came into new importance when the byline of “Iris West-Allen” changed to “Julie Greer” in the wake of the revelation that Iris was to die at the hands of Savitar. Considering that the text on the article details Reverse-Flash duking it out with the Flash, Green Arrow, and Hawkgirl (who’s been MIA for quite some time), it seems unlikely that we’ll see this huge battle. But the dates matching up is too convenient. How exactly will the newspaper headline impact or be changed by Barry’s trip to the future?

Is Iris Really Going to Die?

What’s it going to be? Is Barry’s OTP going to be killed by the supposed god of speed?

Will Savitar’s Prophecies Be Fulfilled No Matter What?

If there’s anything typical time travel stories tend to make clear, it’s that the future is inevitable. Even if you can travel through time to change things, time has a way of course-correcting to ensure that things still happen as they should. Savvy’s ominous prophecy was: “One shall betray you. One shall fall. One will suffer a fate far worse than death.” Over the course of the season, Caitlin secretly kept a piece of the Philosopher’s Stone, Iris has constantly had death looming over her head, and Wally was locked inside the Speed Force, reliving the worst moment of his life. Iris’s seemingly inevitable death could conceivably fulfill the last bit of the prophecy. If she doesn’t die, it’s very likely that someone else will die. It’s also entirely possible that the big betrayal and fate worse than death have yet to be fully realized as well.

Seriously, Who Is Savitar?

At this point, it’s really almost easier to ask, “Who isn’t Savitar?” mainly because there are really no clear clues as to his identity. Is he Barry from the future? Is it H.R.? If there is any question that needs to be resolved ASAP, it is this one. We were right around this point last season when The Flash finally revealed Zoom’s true identity, so it’s only a matter of time.