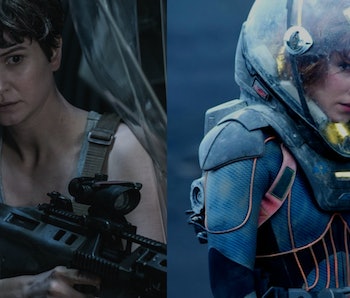 Up until now, it was unclear just how long Dr. Elizabeth Shaw and David’s head had been alone together in the universe, looking for the origin point of the human race. But a newly leaked featurette from the upcoming Alien: Covenant has director Ridley Scott explaining the timeline between Covenant and its prequel, Prometheus, once and for all.

“The Covenant story is happening ten years after the events of Prometheus,” Scott says in the leaked featurette, which was apparently once available via Fox Extras but has since been taken down — officially, at least. “We’re following a new crew as they embark on a mission to colonize a distant world on the far side of the galaxy.” Because Prometheus takes place mostly in 2094, this means Alien: Covenant will kick of the 22nd century in roughly 2104.

So, Shaw and David have had a decade to find the home planet of the Engineers, the alien race Shaw and her partner, Dr. Charlie Holloway, theorized in Prometheus as having created humans. Prometheus ends with Shaw and a bodyless David setting out into the unknown to find that planet, and many have theorized the new planet in Alien: Covenant discovered by Daniels (Katherine Waterstone) and her crew is that very planet.

“When we arrive at that planet, it seems to be a planet of great mountains and rivers and forests,” Scott says. “The Covenant’s explorers discover something that leads to serious, cataclysmic events.”

Michael Fassbender, who will portray both David and the new A.I. Walter in Covenant, says: “This film is like the first Alien in that it’s very gritty and dark.” And Scott promises it will “scare the living shit out of people.”

There’s still no explanation about exactly how the events of Prometheus and Covenant will fit smoothly into the Alien franchise. Fans of Scott’s classic science fiction story will probably have to wait until Alien: Covenant premieres in theaters May 19, 2017.

More like this
Culture
Sep. 25, 2022
35 years ago, the most obscure sci-fi movie tried (and failed) to redefine alien cinema
By Jon O'Brien
Entertainment
Sep. 20, 2022
Constantine 2 signals new life for DC movies — but at what cost?
By Eric Francisco
Entertainment
Sep. 26, 2022
Vesper is a breathtaking sci-fi warning about our real-life future
By Eric Francisco
Share: