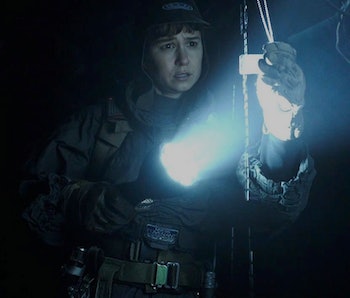 It wouldn’t be an Alien movie if the protagonist didn’t have a death-defying showdown with the monster at some point, and Alien: Covenant will be no different. Katherine Waterston’s Daniels will rumble with a xenomorph while wielding a pickaxe.

On Monday, Metro published an article describing a visit to the set Alien: Covenant in which Katherine Waterston was filming an epic fight sequence which was expected to take “eight days to film” but will only occupy “four minutes of screentime.” According to the report, Daniels (Waterston) is on a moving platform, which is probably the top of a spaceship. “Waterston has to save herself by sticking her pickaxe in a small hole,” Metro reports. It’s unclear how else Daniels will use the pickaxe, but if some reports are to be believed, she may not survive the film at all. Still, Daniels could still win this pickaxe throwdown regardless of what happens later.

This isn’t the first time Alien director Ridley Scott has given his hero an axe in a fight with a monster. In Prometheus, Noomi Rapace’s Dr. Shaw sported a more traditional ax as she fought the trilobite squid-baby alien in the climactic scenes of Prometheus. Because Shaw survived, her ax skills are not in question.

More like this
Culture
5.9.2022 1:30 PM
Exclusive: 'Everything Everywhere All At Once' comic opens up the multiverse
By Isaac Feldberg
Entertainment
5.18.2022 11:00 AM
10 years ago, Rihanna made a terrible sci-fi movie — and launched an even worse Hollywood trend
By Mónica Marie Zorrilla
Entertainment
5.11.2022 7:00 AM
Avatar 2 release date, cast, trailer, and plot for The Way of Water
By Mónica Marie Zorrilla
Share: