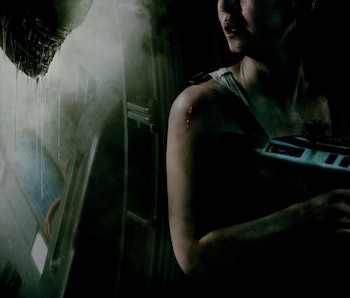 Daniels (Katherine Waterston) of the colony ship Covenant might have more to worry about than just fighting-off the hissing and menacing alien Xenomorphs in Alien: Covenant. One new poster suggests she might actually have one of creatures get inside of her.

On Wednesday, ComicBookMovie noticed a new Covenant poster making the rounds online. In it, an x-ray of Waterston’s character Daniels looks to have a little Xenomorph inside of her. Does this mean Daniels will almost certainly die? Or will she somehow survive a chest-burster emerging violently from her body?

The various imagery in all the advanced material for Alien: Covenant has created a lot of interpretations. A previously released poster for the film suggested biblical themes, while the last big trailer juxtaposed John Denver country music against other-worldly dangers. Tonally, the movie is suggesting a bigger emphasis on horror, but could the little alien inside of Daniels here be a metaphor?

According to Ridley Scott, the entire series of films, which began with Prometheus in 2012, will end up explaining who the Xenomorphs (as we know them in Alien) came to be. If that’s true, the film might also explain how and why certain human characters are in the positions they are in. Could Katherine Waterston’s Daniels be related to Sigourney Weaver’s Ripley? Perhaps this little alien baby inside of Daniels isn’t literal but a representation that she herself (and this film) gives birth to the original Alien movie. It’s not that crazy. Ridley Scott has said and suggested stranger things before.

Alien: Covenant will emerge in theaters on May 19.