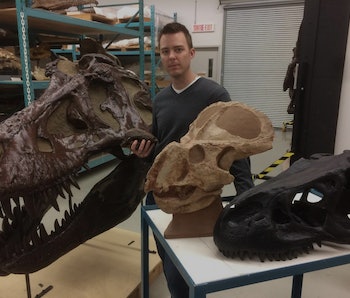 It’s the seemingly basic question that has kept many a paleontologist up at night: How do we know which dinosaurs were male and which were female?

For a number of years, paleontologists have suspected that dinosaurs were sexually dimorphic: Male and female individuals exhibited different physical characteristics. In the same way peacocks have big, showy tail feathers while peahens are much plainer by comparison, paleontologists suspected some notable physical characteristics distinguished male dinosaurs from females.

Jordan Mallon, however, controversially argues in his newest paper that that’s all crap.

“I was bound to rustle some feathers,” the research paleontologist at the Canadian Museum of Nature tells Inverse cheekily.

Mallon has argued against this notion for some time, but on Wednesday he went on the record in the journal Paleobiology to back his theory up with evidence. His paper suggests that there is not enough evidence to say whether dinosaurs exhibited sexual dimorphism — and that dinosaurs’ sexes may not have been easily identifiable.

But how does someone living in the modern day test to figure out whether male and female dinosaurs looked different? That’s something Mallon struggled with, especially considering the fact that many modern paleontologists automatically assume sexual dimorphism.

“A problem common to many quantitative studies of fossil taxa is that they inherently assume dimorphism rather than test for it,” Mallon writes in the paper.

So he tested for it with the help of statistical analysis and measurements scientists had taken on fossils from nine different dinosaur species. Instead of examining each previous study on the topic, he compiled the data from all the studies and considered them together. He ran normality and unimodality tests and mixture modeling on the available data, and found no evidence that dinosaurs were sexually dimorphic.

When Mallon crunched the numbers, he found that in many cases, the number of specimens examined in previous studies were often too small to yield valid results, which meant statistics turned up insufficient or nonexistent results.

The problem with the study on which this conclusion was based, though, is that it relied on insufficient statistical analysis. Mallon says these differences could just as easily be attributed to individual variations in the population as they could to sex. And while statistical analysis may sound like a profoundly unsexy way to talk about the biggest, baddest creatures to ever roam the Earth, it lies at the heart of our modern understanding of dinosaurs.

Even when it comes to statistics, though, researchers can disagree. Peter Larson, a paleontologist in the U.S., has studied Tyrannosaurus rexs, and he has a theory that females possess beefier arm bones than males. He bases this on extensive observations.

Mallon, with whom Larson is collaborating on this T. rex research, disagrees with the findings, though. He says the measurements show normal variation, not sexual dimorphism. “There’s no break in the scatter, it’s all just one gradient of variation,” he told Inverse in December 2016.

Larson recognizes that solid scientific methodology holds more importance than his hunches, but he suspects Mallon is wrong.

“I think that I’m correct, that we can tell male from female, and I think I know which one is which. But I want to prove it — thinking you’re correct isn’t good enough,” he told Inverse in December 2016.

So what would provide Mallon with sufficient proof of sexual dimorphism?

“To find sexual dimorphism in the fossil record, we first have to be able to tell the males and females apart based on things like preserved eggshells or the presence of medullary bone, which we know female birds possess today,” he says. These pieces of evidence help paleontologists identify females in the fossil record. Eggs are obvious, since only females lay eggs, and medullary bone refers to spongy bones that have been depleted of calcium by egg-laying.

“Then we need to be able to use growth rings to determine their age, which we know greatly influences the detection of sexual dimorphism,” Mallon continues. “Only then can we get an idea for whether males and females differed in their secondary sexual characteristics, like crest shape or bone size.”

Mallon is completely aware that this paper will rub some researchers the wrong way, but he insists his goal is to spark conversation.

Plus, it never hurts to be right. “In one sense, I don’t want to rain on anyone’s parade, but in another, you’ve got to follow the data where they lead,” he says. “I think some people will be disappointed, and others quite pleased. I suspected from the outset that there was no evidence for dimorphism in dinosaurs, and felt somewhat vindicated when it proved to be the case.”

More like this
Science
Sep. 15, 2022
This tiny reptile roamed with the dinosaurs — and could solve an evolutionary mystery
By Jennifer Walter
Science
Sep. 22, 2022
Can science prevent a pandemic?
By Tara Yarlagadda
Science
Sep. 21, 2022
NASA's mega Moon rocket passes critical hydrogen fuel test — but there's a catch
By Kiona Smith
Share: