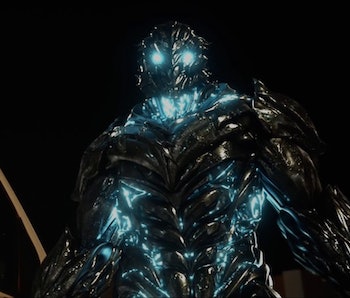 Two concepts have plagued young Barry Allen on The Flash this season: First, he’s been chasing the dream of marrying Iris West (and keeping her alive). Second, he’s been grappling with the question of whether he can kill a villain and remain a “good” superhero. As Barry himself put it midway through Season 3, Green Arrow is allowed to kill enemies without questioning his humanity, but the Flash somehow can’t borrow his friend’s logic. Savitar is at the center of both these problems, and he’ll force Barry’s hand by the end of the season.

Some DC heroes like Green Arrow and Red Hood, kill for vengeance, but very few superheroes kill villains in order to prevent violent acts. If Barry is forced to kill Savitar (or push him into the Speed Force, which nearly destroyed Wally), he’ll be doing this in order to prevent the vision he had of Savitar killing Iris in another timeline. While purely pre-emptive strikes are usually considered unacceptable in superhero stories, some heroes’ special abilities allow them to create a gray area. Over at Marvel, for instance, Civil War II broke out when Captain Marvel realized Ulysses Cain could predict the future and started attacking the people he saw murdering others, even though they hadn’t actually hurt anyone yet. Similarly, the Flash has the ability to peer into the possibilities waiting in any given timeline. He knows with certainty that Savitar would and still can kill Iris, so it’s up to him whether he’s comfortable killing Savitar to stop this.

Of course, Savitar’s identity will only make this choice more complicated, especially if he turns out to be Barry’s future self from another timeline. Talk about a metaphor: In order to define his role in the world, Barry might have to kill the future version of himself he doesn’t want to become.

The Flash airs Tuesdays at 8 p.m. on The CW.