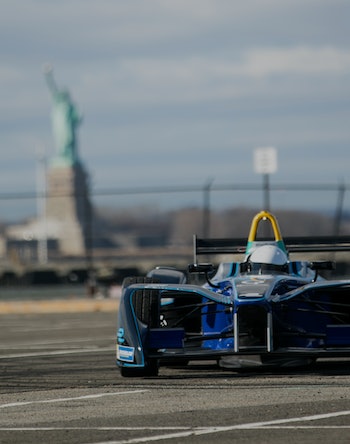 The pier where cruise ships dock in Red Hook, Brooklyn doesn’t offer any signs on a snowy St. Patrick’s Day of the high-speed auto racing that will take place here in just a few months’ time.

But, if you know where to look, clues about the FIA Formula E Championship — set for July 15 and 16 — are starting to appear. Near the gate that separates the nearby Brooklyn Cruise Terminal from the rest of the pier, a surveyor looks at blueprints on his phone. “How did you know I was going to be here?” he asked, startled. A new ferry terminal is being built along the race track by the city, and will be fully operational to move crowds in and out of Red Hook for the race.

The crowds expected to descend on Red Hook will definitely witness a car race, but it won’t be a gas-guzzling affair. The “E” in Formula E stands for electricity, and although the cars resemble the iconic Formula One street-racer, under the hood they’re all battery. The tires still screech, but the sound of the electric motors inside Formula E cars — which hit 150 mph — resonate with a futuristic, high-pitched whir.

Alejandro Agag, Formula E’s CEO, holds the well-established belief that hyper-focused racing is the way to rapidly improve technology before mass adoption. After all, it did the same thing for traditional cars. The thinking has always been that when seconds count, minds, and thereby technological advancement, move faster.

“Formula E is more than a race,” Agag proclaimed at the World Mobile Conference in Barcelona in February. “Formula E is part of the technology revolution in the motor industry. Formula E is a vision of the future of sustainable mobility.”

“Welcome to Historic Red Hook,” reads a banner hanging at the corner of Conover Street and Pioneer Street, calling attention to red-brick buildings built early last century. While a lot about Formula E racing looks to the future, a lot about Red Hook embraces its past. And because of its isolated location in Brooklyn, it’s not (yet) been met with the arrival of glass-and-chrome condos. Also, its position near the water is a double-edged sword. It offers breathtaking views of Lower Manhattan and the Statue of Liberty, but it’s especially hard hit during bad weather, as was the case with Hurricane Sandy in 2012.

Walking the course on a cold March afternoon, one can spot scores of parked cars, and semi-truck and freight containers draped in canvas. The other side of the street is a building covered entirely in construction mesh and scaffolding. Behind a chain link fence are the peaceful shops of Red Hook proper. In a few months, there will be crowds of people lined up to watch electric cars hurtle around this parking lot with the backdrop that includes the One World Trade Center.

“I think it has the potential to be a very good thing for the neighborhood,” Carolina Salguero, Founder and President of PortSide New York, tells Inverse. PortSide New York is a community center and waterfront advocacy group in one, basing its operations in the former oil tanker the Mary H. Whalen. “They’re going to build a race track and a ferry terminal; it’ll be one weekend and it’s over.”

The schedule for Formula E’s descent on the neighborhood is the same each day: A practice lap at 8 a.m. starts a day filled with practice laps and qualifying heats to determine the order of the 20 drivers who will enter the final, which is a roughly 50-minute race that starts around 6 p.m. This is essentially the schedule for the rest of the Formula E Championship races, and the same schedule is repeated Sunday.

Before it arrives in the city, the tour hits Mexico City on April 1, Monaco on May 13, Paris on May 20, Berlin in June, and then New York, with Montreal rounding out the calendar.

The race course is 1.21 miles long and features 13 turns as it winds around Pier 11 and the Brooklyn Cruise Terminal. The batteries in the Formula E cars are still only able to do about 20 to 25 minutes of race speed: Drivers are required to switch into fresh cars halfway through the final race.

Although the dealership is a little isolated now, soon it and the rest of the neighborhood will become much more connected to the rest of the city. The ferry terminal is being built by the city as part of the Citywide Ferry Service project to increase access to neighborhoods without good transportation options. It will likely already be finished by June and race organizers expect it will play a role in getting race attendees into Red Hook.

The deliberate choice of scenic backdrop brought the race into a quiet corner of the city — historically limited in its access to the subway — and the idea of bringing more traffic into the area wasn’t an ideal scenario for all residents. Along the mostly deserted waterfront side of Pier 11 in Red Hook, a few members of the Clipper City schooner perform pre-season maintenance ahead of summer cruise season.

“The beauty of Red Hook used to be that it was hard to get to,” Ryan Mitchell, a deckhand on Clipper City yelled from the deck of the boat as it was docked at Pier 11. “We have a ferry port coming in, things are changing all the time. All our old haunts are gone.” He points to the influx of services like CitiBike (bike rentals) and the fancy art galleries as the bringers of change to his quiet area. Most striking of all: He doesn’t even feel like he can go to his neighborhood bar. “And Sunny’s, I can’t even go there on weekends anymore, it’s full of people I don’t know.”

The transformation from parking lot to race course comes with its own set of challenges. “We’ve been working feverishly to try to put the pieces in place to get our course together,” Mike Hopper, a consultant to Formula E in New York, tells Inverse. “It’s everything from working on the subsurface, repaving portions of the area that are going to be part of the track, and even working with local vendors and local companies to understand how they can be part of the event.”

“We tend to start work a couple of months out from the race, so it will be starting pretty soon,” says Sam Mallinson, a press officer for Formula E. Construction of grandstands and other race-day infrastructure are still to come.

And while the major surface works are starting soon, the details of the race track itself will come about a month before the race, organizers tell Inverse.

A few of the residents in Red Hook we talked to had heard about the race coming into town, but two-thirds of the fifteen locals Inverse spoke to in businesses along the main Red Hook drag hadn’t.

New York City Council Member Carlos Menchaca, who represents Red Hook, didn’t know about the race when Inverse asked — his office said in late February it hadn’t received any information about it, but on March 21, he received his first briefing. David Estrada, communications director for Menchaca, tells Inverse that the council member was eager to hear about community engagement, event management, and the local economic benefits.

Hopper says that a number of tickets have already been reserved for Red Hook natives and Formula E is working on a distribution plan. One of the projects will feature local students enrolled in high school automotive programs and community colleges.

This excitement has yet to reach the old-timers who work at Van Brunt Street’s single gas station, though. A lone truck sat outside the pump, which also features an auto body and tire repair shop. Three locals were hanging out just shooting the shit out front as I walked by.

When asked what they knew about the Formula E race coming, one replied immediately with a laugh, “We’ve heard what you’ve heard, there’s a race coming.”

His companion immediately started interrogating his friend in a thick Brooklyn accent, “What’ve you heard? I haven’t heard anything. I’ve been living in this neighborhood for 30 years and I have to hear about it on the street — on St. Patty’s day no less!”

The two started arguing good-humoredly, but told me, “come back in a few months and we’ll tell you what we think then.”