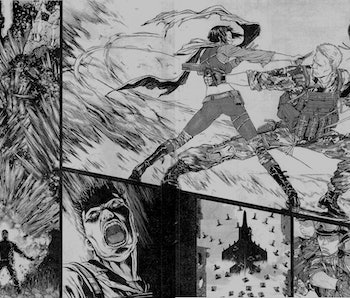 The story of Ghost in the Shell takes place in the near future: 2029. The world is pretty similar, just more high-tech, more reliant on machines, and, seemingly, more corrupt than ever. The upcoming American adaptation of Masamune Shirow’s Ghost in the Shell manga will follow the story of the Major (Scarlett Johansson) and her work with Public Security Section 9.

In the manga, Section 9 is a special operations task force made up of former highly skilled military officers and police detectives and is led by Daisuke Aramaki. The Major is the field leader, acting as the point to a group of men, with only a couple of them being fully human. People die and the story is often philosophical, which is sometimes well-disguised by the cyberpunk action story.

Here’s a brief list about the basics of Ghost in the Shell from the original manga to prepare you to understand the upcoming American film.

Ghosts Are Monikers for Souls or Spirits

The Major, like many others, is essentially a brain and spinal cord inside a technological “shell.” A “ghost” is the Ghost in the Shell world’s slang for a consciousness or spirit. Ghost in the Shell is often a deeply philosophical story that points out that no matter how much of a person’s body is replaced with technological and artificial pieces, their consciousness will stay intact.

The multi-legged, hive-minded Tachikomas are combat vehicles enabled with artificial intelligence. They tend to do a lot of talking back and, despite being synced every night and sharing a collective memory, they each have a very distinct personality.

Section 9 is originally assigned nine Tachikomas, and each of the operatives has a relationship with their own machine.

While most of the “shells” in Ghost in the Shell are fully humanoid in form — such as the Major — others have smaller enhancements or don’t resemble a human at all.

Issue 6 of Ghost in the Shell — “Robot Rondo” — features a crime boss in the form of a giant metal box with arms. The innards might be the same as a human and there might be a brain and spinal chord to connect everything, but the outer shell is very much not human.

The First Big Storyline Is About a Cyber-Criminal Called Puppet Master.

Section 9 spends the first big story arc of the series hunting down a mysterious villain called the Puppet Master. Completely inhuman, the Puppet Master is an experiment-gone-wrong of Section 6 of Public Security. The artificial intelligence, originally called Project 2501, is created for the Japanese Ministry of Foreign Affairs to secretly manipulate politics and the intelligence world. The project can alter the memories of cybernetic people and, really, do just about anything. Its intelligence and reach is unparalleled.

Eventually, Project 2501 becomes sentient and goes completely rogue. It’s groups such as Section 9 that are hunting the mysterious criminal down that name it Puppet Master (or the Puppeteer). The groups originally suspect Puppet Master to be human, but Section 9 ends up interacting with Puppet Master in a way it never expected.

The Major is Kind of a Sass Master

Unlike in the later adaptations and anime, the Major in the original manga trades insults with her crew and tends to call their handler, Aramaki, “ape face.” She throws up peace signs, talks back to her seniors, is openly sexual, and cracks jokes pretty frequently.

The Whole Story Is Very NSFW

Be warned: There’s violence, sex, nudity, and just about anything else you can imagine in Ghost in the Shell. Since the upcoming American adaptation will be rated PG-13, it’s doubtful the film will follow the manga’s trademark raunchiness.