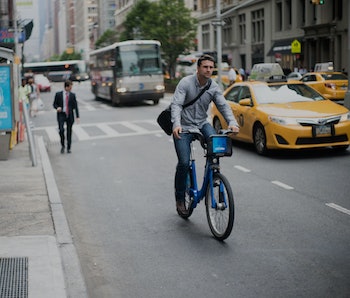 The daily battle between cyclists and cars has raged in bike lanes (or lack thereof) across the world for years, but self-driving cars, with their passive, emotionless application, might finally bring peace to the streets.

A new survey released Tuesday from BikePGH, a cycling nonprofit in Pittsburgh, found that active bikers were more comfortable sharing the road with an autonomous car than they were with a human driver.

“The Uber office is based a couple blocks from our office, so I might see a dozen or so autonomous vehicles a day, and my personal experiences have been very good,” Eric Boerer, Advocacy director at BikePGH tells Inverse. “But we weren’t sure how everyone else was feeling about them.” After the survey, Boerer found that “generally, people are feeling pretty good about the AV’s.”

For bikers, a car that obeys the rules of the road and doesn’t make aggressive passing maneuvers through bike lanes or around corners is an improvement. In early testing last year, an Uber AV made just that mistake — illegally crossing into a bike lane while making a right turn, but it appears that Pittsburgh’s cyclists have largely managed to forgive the ride-sharing company (which is a nice pick-me-up for Uber, which hasn’t had a great 2017 so far).

Of the people who took the survey, about half approve of the cars whole-heartedly, and 30 percent are somewhat approving or neutral. One comment published in the write up of the survey stated: “[autonomous cars] are neither distracted, intoxicated, nor aggressive, unlike the far more numerous human operators I encounter on the roads.” Almost two-thirds of responders thought that self-driving cars could reduce accidents. With that in mind, it’s maybe a little unclear if cyclists really like self-driving cars, or just hate regular drivers.

But to be fair, regular drivers are not that great. Most of the self-driving cars in Pittsburgh respect bike lanes and follow traffic laws, something Uber is probably hoping remains the case after being kicked out of California. When Uber began testing its autonomous cars in September of last year, Pittsburgh Mayor Bill Peduto told Inverse that he didn’t expect them to be flawless.

And as more autonomous cars hit the road, Boerer imagines the number of personally owned vehicles will drop. “Depending on how this plays out, it’s not unreasonable to think that our parking demand is going to go down,” says Boerer. “So there will be a lot of space, and I think bike lanes would be a great use.” There are some interesting urban plans that move to put protected turning lanes for cyclists at intersections, which are likely become more common.

“This is based off reading a lot of the open-ended responses, but it seems like autonomous vehicles work best when there’s a separate space for bikes and cars,” says Boerer. Cyclists are probably going to be some of the only human-driven vehicles autonomous cars will interact with in the future. And with a number of cities imagining that the future will have fewer cars, many are already investing in bike lanes. Get ready for the cycling revolution.

More like this
Innovation
Sep. 22, 2022
Trash can-sized robots could revolutionize how you travel — but there's a catch
By Molly Glick
Innovation
Sep. 15, 2022
This jet engine-powered EV revs up a wild 70-year-old idea
By Andrew Moseman
Science
Sep. 20, 2022
Extreme heat linked to harassment at work, study reveals
By Tara Yarlagadda
Share: