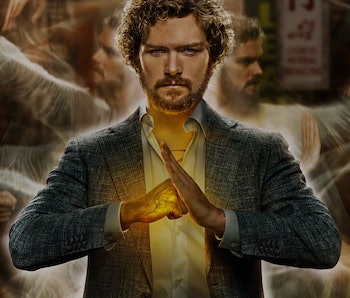 Despite getting trashed by critics, Marvel’s Iron Fist appears to be a hit in terms of popularity on Netflix.

The kung fu superhero show is generating higher demand than Marvel’s Daredevil or Jessica Jones did in their launch week, according to Parrot Analytics, and it’s falling just short of Luke Cage. That’s pretty good, given that Luke Cage was the 16th-hottest show across all platforms in 2016.

Third-party analysis is necessary because Netflix doesn’t share viewership data, except in selected cases. Parrot tracks viewership by evaluating streaming video, P2P-sharing, social chatter, and more. (The company assures us that it is able to distinguish between positive and negative social chatter to avoid potentially overrating a show like Iron Fist.)

Here’s a comparison of demand for Netflix’s four Marvel shows in the days leading up to and after launch:

Meanwhile, here’s how those shows have tracked over time, with “Iron Fist” being by far the most popular right now:

Oh yeah, and also, despite getting trashed by critics, “Iron Fist” seems to be pretty popular with fans. Netflix’s predicted rating for me (which is supposedly an objective value based on my viewing history and the behavior of similar users on the platform) is five stars. My actual rating for it? Somewhere between 3 and 4 stars, but I’m still going to finish it within the week.