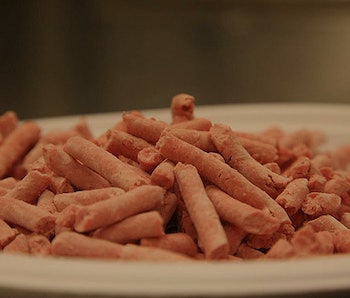 For more than 30 years, lean, finely textured beef — LFTB as it’s known in the meat industry — was everywhere. But after a brutal story on ABC News in 2012, public outcry forced one of the main producers of LFTB, Beef Products, Inc., to close three of its four factories. Now, under a strange set of laws intended to protect the food industry, BPI’s libel lawsuit against ABC is moving forward in South Dakota court.

This case stems from 2012 when ABC News produced a multipart exposé on LFTB, or as it’s now commonly called, “pink slime.” Correspondents Diane Sawyer and Jim Avila described how producers made this product, which they said acted as a filler in 70 percent of ground beef in the United States.

“Beef trimmings that were once used only in dog food and cooking oil, now sprayed with ammonia to make them safe to eat, and then added to most ground beef as a cheaper filler,” is how Avila described the product.

This description is, while technically true, a little oversimplified. LFTB comes from the trimmed fat and muscle that are produced when processing plants prepare cuts of meat for market. These bits and pieces get shipped to a plant, like one of BPI’s, where they are processed into LFTB. The trimmings get lightly heated to soften fat, and then spun in a centrifuge to separate out the fat from the meat. Then, the remaining meat — which is very low in fat but basically unrecognizable as meat — gets sprayed with ammonia to disinfect it before being packed into blocks, flash frozen, and shipped to ground beef producers. It’s basically a pink jelly at that point. Since the 1980s, ground beef producers had used it as a cheap filler.

After ABC’s report, though, angry citizens demanded that the product be taken off the market, and the industry scrambled to stop using LFTB.

That brings us to today, when BPI’s libel lawsuit against ABC is moving forward in South Dakota court. South Dakota has a special libel law to protect food producers against unflattering media coverage.

The typical libel claim rests on the fact that a defendant knowingly published false information that harmed the plaintiff. Jacob Gershman explains in the Wall Street Journal, though, that food industry lobbyists made this lawsuit possible by pushing for special legislation that made libel claims on behalf of the food industry even easier to win. These food-disparagement laws, which South Dakota, among other states, has adopted, say that a libelous news article only need to contain an “implied disparaging claim.”

So even though ABC correspondents clarified that “pink slime” has not been shown to be unsafe, BPI’s lawyers say that ABC’s implied disparaging claim harmed their bottom line. If Beef Products, Inc. wins, this case could prove a milestone in food industry libel law.

More like this
Science
7.31.2022 1:00 PM
How do cats co-exist with each other? The answer may lie in their gut
By Tara Yarlagadda
Science
7.28.2022 6:00 PM
Meet the tiny critter that pollenates seaweed like a bee
By Jennifer Walter
Science
7.26.2022 10:00 AM
Trap-jaw ants are so powerful they should implode — scientists finally uncovered their secret
By Charles Q. Choi
Related Tags
Share: