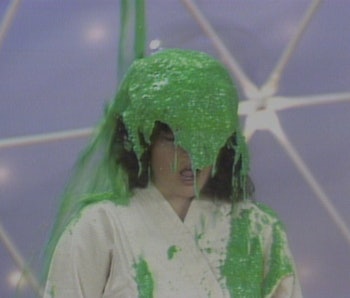 It’s not the biggest industry secret in television history, but the question of what the notorious sludge is made from came up Friday during an MTV News interview with Summer Sanders, the former Olympic swimmer who had hosted Nick’s Figure It Out —and, for all the TV trivia people out there, also handled hosting duties for MTV’s Sandblast in the early 1990s with actor/comedian Kevin James.

Sanders was asked about the content of the green slime— Nickelodeon’s signature goo that has been a part of its programming since the days when You Can’t Do That on Television was pouring it on the likes of a preteen Alanis Morissette:

Her answer: vanilla pudding. Sanders explained it has always just been vanilla pudding with green food coloring. However, MTV has gone on to further explain that her experience only informed her of one particular slime mixture, with other concoctions including oatmeal, Jell-O and even baby shampoo. Somehow, knowing that green smile isn’t made of more noxious chemicals still doesn’t make it look all that inviting.

More like this
Science
7.5.2022 12:00 PM
The greatest dinosaur sci-fi franchise ever reveals a problematic genetics debate
By Andrew Maynard and The Conversation
Science
6.25.2022 4:00 PM
Voyager: 12 spectacular images from NASA's longest-lasting mission
By Jennifer Walter
Culture
23 hours ago
64 years ago, Hollywood made the most rip-roaring Viking movie ever
By Emil Stern
Related Tags
Share: