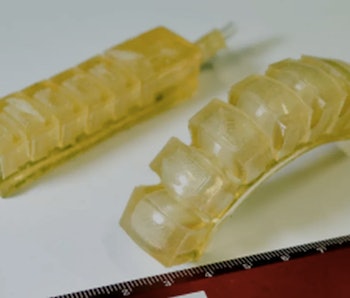 When people think of robots, food usually isn’t the first thing to come to mind. Robots aren’t typically edible, but that could change: a group of scientists might have found a way to create machines out of organic substances like gelatin that could do everything from explore sensitive environments to deliver themselves up for dinner to remote communities.

Researchers at the Swiss Federal Institute of Technology have been working on edible robots for a while, but recently discovered a way to make actuators — the part of a machine that facilitates movement — out of a certain kind of gelatin. The researchers have already managed to create edible batteries, transistors, electrodes, sensors and capacitors, but the idea of an entirely biodegradable robot was not possible without an edible actuator.

This new jelly wonder could have a lot of uses in scientific exploration, mainly because it is non-toxic and environmentally sustainable. The researchers suggest using it to study animal behavior in the wild by making it resemble prey, allowing researchers to understand animal’s hunting practices. They could also be used to design a robot that could crawl inside the human body and help it heal, like putting a bandage on from within. An edible robot could even carry food or medicine to remote communities or places that need relief, and then be consumed for extra sustenance.

The researchers were inspired by soft actuators created out of silicon, and decided to mimic the design using just three ingredients: gelatin, glycerol, and distilled water. Gelatin is very challenging to work with because it disintegrates, but the researchers were able to toughen it out by elongating it over and over, like making taffy. They then hollowed it out with a laser. The last step was pressurizing it, which caused the actuator to balloon and curl up.

Researchers repeated the pressurization multiple times and found the actuator can withstand being inflated and deflated several times over. They also found that it can withstand the same amount of pressure as a silicon actuator and even build up enough force to lift an apple.

Just to make it even more hardcore, with the right design, the actuator may be able to heal itself if it melts.

So, it seems with an edible robot you really can have your cake and eat it too, or rather, your tasteless gelatin. Now the question is, who’s willing to eat it?

More like this
Innovation
5.13.2022 11:00 AM
These robots have one special skill that could make human chefs obsolete
By Sascha Brodsky
Innovation
5.12.2022 6:00 PM
Star Wars: A robotics expert reveals the The Mandalorian's biggest flaw
By Sarah Wells
Mind and Body
5.15.2022 10:30 AM
Lemon water won’t detox or energize you — but here’s what it can do
By Evangeline Mantzioris and The Conversation
Related Tags
Share: