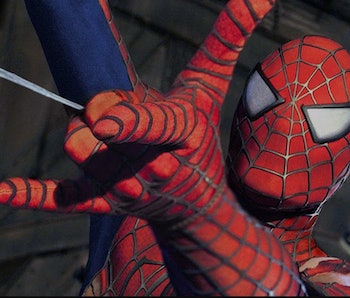 In the original comic book series, Spider-Man didn’t produce spider silk biologically; instead, he shot it out of web-shooters attached to his wrist. With these synthetic “web-fluid capsules,” Spider-Man was a pretty decent hero, fighting villains and slinging through the city. He’d be an infinitely better hero if his spider silk could actually heal people medically.

While Spidey was never much help in the first aid department, real-life scientists have created a synthetic spider silk that can do everything that his silk couldn’t do. In a recently published paper in Advanced Materials a team of chemists and spider experts report that they have developed a synthetic spider silk that not only is antibiotic but also can be used for drug delivery, healing wounds, and in regenerative medicine.

By employing a process called “click chemistry,” the researchers attached antibiotic molecules to spider silk that had been artificially synthesized by E. coli bacteria. These molecules are attached (or “clicked”) while the silk proteins are being spun into fibers. The resulting fabric — the researchers call it a “biodegradable mesh” — can do multiple jobs because each fiber can be attached to many different kinds of molecules, such as different types of antibiotics or even fluorescent dyes. The resulting spider silk can be used as a form of antibiotic Band-Aid for wounds, allowing the growth of new cells while harmful bacterial growth is kept at bay.

“There is the possibility of using the silk in advanced dressings for the treatment of slow-healing wounds such as diabetic ulcers,” said co-author Neil Thomas, Ph.D., in a statement. “Using our technique, infection could be prevented over weeks or months by the controlled release of antibiotics. At the same time, tissue regeneration is accelerated by silk fibers functioning as a temporary scaffold before being biodegraded.”

For the past two decades, researchers have been racing to perfect a synthetic material that mimics the strong, biocompatible, and biodegradable nature of spider silk. The desire predominantly stems from the fact that spider silk has the potential to be applied to a variety of products ranging from bulletproof vest technology to lightweight yet tough performance outdoor gear. The University of Nottingham, among other research facilities, wants to use spider silk to save lives — which is something that Spider-Man would approve of.