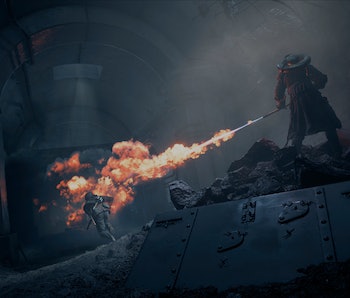 Introduced in Battlefield 1’s first paid DLC expansion They Shall Not Pass, Frontlines is an entirely new game mode that combines the best elements of Conquest and Rush into a single package that brings the complex push-and-pull engagements of World War I into the game. Like Operations but on a smaller scale, Frontlines is a symmetrical conflict where a single contested line can move in both directions. Every time you conquer a flag, your team will then push forward to take another enemy line until you take the one closest to the enemy base where two Telegraph Posts will be sitting waiting. Once you’ve pushed the enemy team back to their base, you’ll then have 40 tickets to blow up both Telegraph Posts and claim victory. But, if you fail, you’ll be pushed back to the previous frontline and the conflict starts all over again.

Because of the consistently moving line, Frontlines is a very intense game mode all about strategic positioning and momentum that plays differently from the rest available in Battlefield 1. Here are a few things you should know to master the new game mode added in They Shall Not Pass.

Whenever you secure a flag in Frontlines, you’ll immediately be prompted to push up to the next line before clearing out all the enemy players scattered around your current position. While moving forward with the full force of your team could reward you with a quick flag capture and allow you to push closer towards the enemy base, if you fail to conquer the new position, you’ll have a ton of enemies waiting for you at the previous objective. Since this gives the enemy team a capture advantage and allows them to dig in before you return, make sure to hang back with a few teammates and clear them out from the old objective, even if your team moves forward to the next one. That way, if things take a turn for the worse at the next line, you’ll have the defensive advantage.

Use Armor to Push Enemy Lines

In many of Battlefield 1’s standard game modes — like Conquest and Rush — allied armor is usually used to eliminate massive groups of enemies or lock down a friendly objective from incoming enemy infantry. Regardless of the situation, though, armor is constantly moving around and can easily be swarmed by dozens of assault players with anti-tank grenades. In Frontlines, armored vehicles play an important role, because they can push with friendly infantry to eliminate assault or support players that pose a threat. More importantly, however, they can rain down hell on enemy infantry shacked up in buildings or trenches. That’ll clear the way for your teammates to secure a flag objective and push the line forward. If you’re in an armored war machine like the new French St. Chamond Assault tank, don’t be afraid to sit back and slowly push the enemy line.

Clear the Way with Grenades

While smoke and gas grenades see little use in Battlefield 1 — compared to the explosive options like the frag or impact grenade — you’ll want to consider equipping them while playing Frontlines, especially if you’re having a tough time pushing through enemy defenses. Despite not doing much damage, gas grenades often force players to equip gas masks which prevent them from aiming down their weapon’s sights, thus giving you a distinct advantage from a distance. Like gas grenades, smoke grenades also work well as a disruptive tool, allowing you to blind enemies entrenched in a heavily fortified position.

Just like every other game mode in Battlefield 1, Frontlines is about capturing and holding objectives with each passing offensive push your team makes or defensive hold you manage to pull off at your home base. With every match of Frontlines, you’re going to have to capture and hold a single position on the map with your teammates, which is more important than killing enemy players when it comes to claiming victory. What’s great is that each objective in Frontlines is also much larger than those in other modes like Conquest or Rush, meaning that you have a massive area to fight in while also securing the objective for your team. So, if you’re a sniper that typically enjoys hanging back or an assault player that likes to flank the enemy spawn, be sure to do it around one of the key objective points to keep your teammates happy.