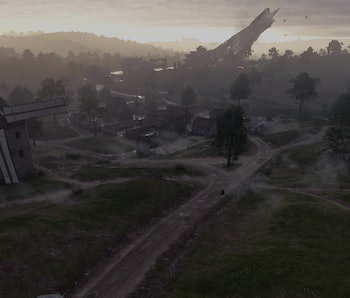 The latest update for Battlefield 1 comes complete with a giant list of general tweaks and fixes, balancing changes to weaponry, and the addition of a brand new map to the game’s base rotation, Giant’s Shadow. The map was available early for premium players and those who pre-ordered, but is now available for free to all Battlefield 1 owners. If you haven’t had a chance to check it out yet, Giant’s Shadow is a fantastic addition that allows you to battle it out among the wreckage of a gigantic zeppelin. But it has one glaring problem: It’s just far too narrow.

When you first catch a glimpse of Giant’s Shadow in-game, the narrow design of the map doesn’t seem like too big of an issue. That’s especially true in game modes with smaller player counts like Rush or Team Deathmatch, because they limit how much territory is available. Conquest doesn’t seem to be too bad either, provided you travel with your teammates in large charges to the capture points scattered about the map. But when you get caught in one of the fields without any cover? Things can get frustrating.

These gigantic, rolling hills are the paths which link the three key areas of Giant’s Shadow: the village, the crashed zeppelin, and the railway station. Each area features a distinct design that requires a specific strategy to capture and hold, meaning that you’ll have to work as a balanced team of Assault, Medic, Support, and Scout classes to successfully win a match. Compared to these key conflict zones, the narrow grassy knolls are a mess. They lack any form of cover unless you’re using the dynamic fog to get the drop on your enemy, and leave you wide open to attack from enemy armor, snipers, or aircraft.

During my time with Giant’s Shadow, I’ve seen far too many instances where teams of players will either be trapped in the crashed zeppelin at the center of the map or be locked down by enemy vehicles and sniper fire as they try to scale the hills connecting the Conquest objectives. While some certainly can make it through if enough push up, plenty of players find themselves being consistently mowed down without a way to navigate past a fortified enemy hold on the center.

Naturally, the answer to being locked down by the enemy team like this is to flank around their lines and hit them from behind or capture their Conquest objectives behind said fortified areas. Most base maps (apart from Suez) give you the opportunity to do so thanks to unrestricted flanking routes, but with Giant’s Shadow, it’s just a matter of luck due to the boundary limitations on the top and bottom of the map. There’s little room for players to maneuver without being picked off by a sniper or detected by the enemies holding the crashed zeppelin in the middle. Without having buildings, trenches, or even crashed vehicles to occupy the empty space in these killing fields to use for cover, you’ve literally just got to bolt around on a horse or motorcycle and pray you don’t get hit if you want to break the stalemate.

Odds are this is how DICE intended the map to be played, which, while frustrating at times, can lead to some excellent moments you won’t find anywhere else in Battlefield 1. Enemy teams often charge objectives with multiple squads to try and run through the clearing without getting picked off, tanks take shots at each other while trying to maneuver around enemy Assault players, and planes rain hell down on those who are out in the open. While these don’t fix the limitations of the narrow objective pathing, they sure do provide some excitement to the pain.