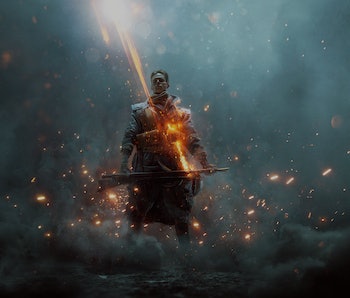 They Shall Not Pass, the first paid expansion available for DICE’s popular World War I shooter invaded Battlefield 1 on Xbox One, PlayStation 4, and PC on Tuesday for players who own the Premium Pass. The new expansion focuses on introducing the French army into the current multiplayer rotation and features four new maps, two new Operations, four new melee weapons, a new behemoth called the Char 2C, a new elite class built for melee combat, and six new weapons (two for each respective class).

While the new maps, Operations, elite class, and behemoth are available right off the bat, the six new weapons are a little more challenging to unlock for their respective classes. Like in previous Battlefield games, you’ll have to complete a set of assignments added with They Shall Not Pass which feature specific challenges with the weapons and equipment already available in-game.

If you have yet to dive into They Shall Not Pass for yourself or are waiting until the expansion unlocks for those who don’t own the Premium Pass, here’s every weapon available in the DLC along with how to unlock them in-game.

This new semi-automatic shotgun, which is available to the Assault class, packs quite a punch. Built from a Swedish design utilizing a unique firing mechanism that unlocks the bolt by applying force to the firing pin, the Sjögren has a visual design which makes it stand out from the other shotguns in Battlefield 1. While it doesn’t compete with the Model 10-A directly, you’ll want to try it out when fighting on many of the close-quarters included in They Shall Not Pass.

To unlock the Sjögren Inertial Factory, you’ll have to perform 50 kills with the Model 10-A Slug and kill 15 enemies with the M97 Trench Gun Hunter in a single round.

The Ribeyrolles 1918 Factory is the only Assault class weapon to come equipped with a bipod so far, and it’s just about the closest you’ll ever get to using a carbine in Battlefield 1. While on par with the MP 18, the Ribeyrolles sacrifices hip fire accuracy for ranged accuracy when you’re aiming down sights, allowing you to engage enemies reliably at longer distance. It is one of the most difficult weapons to unlock in the DLC however.

To add the Ribeyrolles 1918 Factory to your collection, you’ll have to perform 50 kills with the Automatico M1918 Factory and kill 20 enemies with headshots while using the MP 18 Optical.

The new addition for the Medic class in They Shall Not Pass is the RSC 1917, a powerhouse built to drop enemies with two well-placed body shots compared to the standard three shot requirement from the other rifles in Battlefield 1. Even though you can only fire six rounds before reloading, the RSC 1917 Factory and Optical are a force to be reckoned with on the battlefield if used properly.

To unlock the RSC 1917 Factory, you’ll have to perform 50 kills with the M1907 SL Sweeper and revive 50 of your teammates on the battlefield. If you’re interested in the RSC 1917 Optical, you need to kill 15 enemies during a single round with the Autoloading 8 .35 Factory and heal 75 teammates.

Like the Medic Class, the Support class only gained one new weapon in They Shall Not Pass with two different variants you can use on the battlefield. Unlike the other light machine guns in the game, the Chauchat is designed to put out more damage per round allowing you to get multiple kills in close quarters engagements without having to reload. While its 20-round magazine and limited customization options aren’t exactly perfect, the damage potential makes it a weapon worth trying out if you’re a fan of the Support class.

To get your hands on the Chauchat Low Weight, you’ll have to perform 50 kills with the Lewis Gun Suppressive and resupply your teammates 75 times. The Telescopic version can be unlocked by killing 15 enemies in a single round with the M1909 Benét-Mercié Telescopic and performing 10 kills with the Mortar.

The Lebel Model 1886 Infantry and Sniper

Easily one of the most iconic rifles used by the French during World War I, the Lebel 1886 is the only new weapon the Scout class can unlock in They Shall Not Pass, but it comes complete with two variants like the Medic class and Support class weapons. Like most bolt-action weapons in Battlefield 1, the Lebel 1886 has a great amount of stopping power but at the cost of a very, very long reload time that just doesn’t make it the most appealing weapon choice for the Scout class.