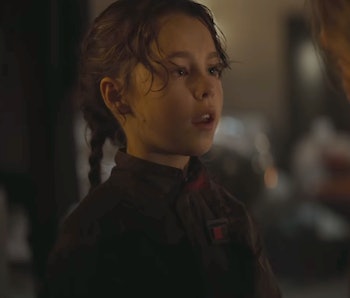 The Erso family shares a lot more than the willingness to die for what they believe in. It turns out the script of Rogue One: A Star Wars Story was actually far more clever than anyone gave it credit for. While everyone was sobbing over the ending and wondering what, exactly, happened to the gang before the now-historic reshoots, Star Wars fans missed some extremely clever parallel dialogue amongst the Erso family.

As Reddit user localcosmonaut pointed out on Monday, both Lyra and Galen Erso say the same thing to Krennic right before he kills them: “You’ll never win.” When Galen says it, Krennic responds with: “Now where have I heard that before?” as pointed out by user JediPaxis. It’s a low blow from Krennic, most likely bringing Lyra’s death back right before Galen suffers through his own.

But it’s Jyn who, undoubtedly, steals the show in all this. “You’ve lost,” Jyn says before Cassian Andor manages to take Krennic down at the last second, the ultimate callback to her parents’ final moments.

Krennic was undoubtedly reminded of his killing Jyn’s parents right in front of her. Talk about an ultimate revenge for Jyn — despite dying minutes later in a fiery, planet-shattering explosion from the Death Star.