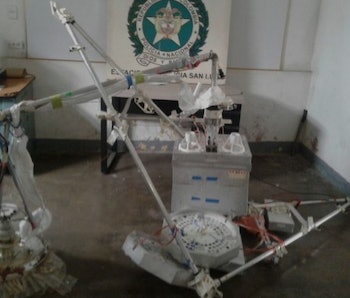 Google makes a lot of weird, interesting technology befitting for an emerging space-age. But until now, it’s never made an actual UFO. Then on Monday, civilians in the small town of San Luis, Colombia found a strange machine crumpled in a heap, blinking and smoking with a “strange liquid leaking from it.”

“We all thought it was a UFO or the remains of a spacecraft,” locals told El Tiempo newspaper, according to the BBC.

It turns out they were almost right, but not quite. In fact, the strange boxy object was an internet drone owned by Google’s Project Loon, a remote internet project that uses floating balloons to beam down internet access to remote parts of the world like Sri Lanka.

For all its sophistication, not even Google is immune to the old maxim of “what goes up must come down.” A similar balloon crashed in Sri Lanka last year. When the device came down in San Luis, locals initially thought it was a satellite.

Jorge Esguerra, the police commander for the greater Tolima region, correctly identified the “UFO” for what it was, denying that it was a satellite, as previously reported on Twitter. “It’s a technological device used by Google which moves around and is held aloft by a balloon,” he said.

Still, you can forgive the local residents of San Luis for thinking that something extraterrestrial had landed in their backyard. Check out this video of the device’s discovery. The caption in Spanish reads:

“Inhabitants of San Luis were shocked by the presence of a strange artifact that fell in the area. What will it be?”

Here’s another video from a local news outlet:

Google’s internet balloon crash is just a single incidence of a wider trend. Since 1990, UFO sightings have been on the rise, mainly because there’s just even more stuff in the air and upper atmosphere — drones, balloons, satellites and more. And like Facebook’s disgraced Aquilla drone, they often tend to crash. The more stuff we put up, the more stuff is going to come down. When the people those instruments are flying over don’t even know what’s up there, we can expect plenty more UFO rumors along the way.

More like this
Science
6.16.2022 1:30 PM
China's search for alien life turns up something suspicious — but there's a catch
By Rahul Rao
Science
22 hours ago
Cosmic rays could erase evidence of past life on Mars
By Kiona Smith
Science
6.22.2022 10:15 AM
Ice could bring an unexpected key ingredient for life in alien oceans
By Kiona Smith
Related Tags
Share: