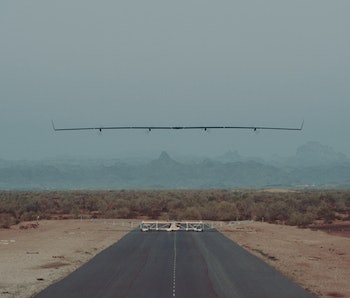 Facebook wants to shoot internet-laser beams at solar-powered planes to connect the final two billion people without internet access to the World Wide Web. Like many high-concept tech ideas, it sounds like something out of a sci-fi novel, but Facebook’s actually gone and done it: the company’s solar-powered Aquila drone completed its first test flight this week.

It’s impressive stuff, mainly because solar-powered planes are still a fairly new idea. Bertrand Piccard completed the first transatlantic solar flight in June, but that took only four days. Facebook wants its planes to stay in the air for months. It’s designed a plane to do that, and it didn’t fall out of the sky on its first flight, so that’s promising.

Out of a global population of around 7 billion, Facebook estimates around 4 billion people are not online. For the world’s largest social network, that’s a problem they’d like to solve. Their reasons vary (if more people are online, more people can use Facebook), but around 1.6 billion of them live in areas without any internet infrastructure. No fiber optics, no phone service, nothing. Even if they want to and can afford to, they can’t load up cat GIFs on their lunch break.

Aquila wants to solve this by beaming internet, plane to plane, with lasers. The super-light solar-powered planes will stay in the air for months, moving at slow speeds, with each of them covering a 60-mile area. Facebook isn’t about to take over global communications, though. When it’s mature, the tech will be either licensed or sold to local operators.

“It’s not something you necessarily expect Facebook to do, because we’re not an aerospace company,” said founder Mark Zuckerberg in an interview with The Verge. “But I guess we’re becoming one.”

Aquila’s test flight was just one aircraft whizzing around for less than two hours. Zuckerberg’s end goal is to have a whole range of these, flying around at 60,000 feet, staying in the air up to 90 days. It’s great that Aquila passed the test — the debut flight was meant to last 30 minutes, and it stayed up for triple that — but the challenge is only getting started.

“Our analysis from the first flight will help us fly Aquila higher, faster, and longer in the coming months, and eventually we’ll add solar cells, instrumentation, and payload all of which will require even more innovative engineering and design,” Mike Schroepfer, Facebook chief technology officer, wrote in a Facebook post.

First, the team needs to make it lighter. Right now, Aquila weighs under 1,000 pounds thanks to its carbon fiber structure, but any weight saving will help with fuel efficiency. The team has said that flying a big, light plane at low speeds may result in some interesting aerodynamics weirdness, but so far Aquila has performed as simulations expected.

Then there’s power. If it’s solar-powered, how will it stay up at night? Facebook needs to make sure the plane can store surplus energy and power itself consistently. There’s a tradeoff between battery size, weight, and power, so the team will need to research how to get the most out of high-density batteries.

The fourth concern is maintenance costs. If Facebook is going to be handing these things over to third parties, soaring the skies in the farthest reaches of the planet, they need to know that a spare screw isn’t gonna break the bank.

These are all long-term objectives, though. In the coming months, the team will make progress by conducting more flights and taking more data and measurements. The team even hints that it may experiment with new designs in its aim to bring the weight down further.

There’s still plenty of question marks surrounding the project. How much will it cost? Will the internet access be affordable? What happens if one crashes? They’re big questions, and none of them have easy answers, but Facebook has still taken a big step towards bringing cat GIFs to everyone in the world.