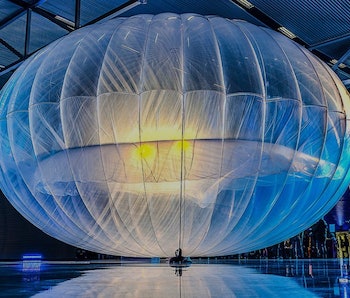 Sri Lanka will soon become the first country in the world with nationwide Internet. The government of the island nation off the southern coast of India has just signed a deal to deploy Google’s high altitude balloons to make broadband Internet coverage accessible to everyone in the country.

The balloons are a part of Google’s Project Loon, the company’s R&D program to deliver 3G-like Internet to rural and remote areas of the world. Over five billion people on Earth still don’t have regular access to the web.

The balloons basically work by forming an aerial network that acts like a floating telecom tower, with the ability to move around and adjust to specific winds in order to stay afloat and maintain a relatively stable network. Surface-dwellers who wish to connect just have to use a specially-designed antenna that connects to the balloons, which then forwards that signal to an ISP.

The balloons can’t stay up in the air forever; they need to replaced consistently. The record streak for a continuous Google Loon flight is currently 187 days, while the average is much lower. But each balloon can reportedly cover 5,000 square kilometers. A country like Sri Lanka would only need about a dozen to get all of its residents connected.

Sri Lanka is home to more than 20 million people, but the Internet will not affect all of them equally. Class and ethnicity are entwined on the island and, until recently, the country was mired in a 26-year civil war that may have killed as many as 100,000 people and certainly displaced many more.

What makes the Sri Lanka experiment particularly compelling is its cultural ramifications. Greater Internet coverage will likely allow many Sri Lankans, who have traditionally depended on an unreliable local press, access to deep reporting on their country’s recent past. Information is always politically fraught, but it may be doubly so in Sri Lanka.