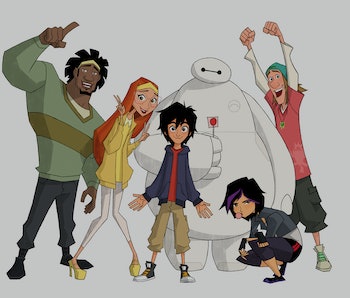 Three years after the world fell in love with Hiro, Baymax, and the rest of Disney’s Big Hero 6, a new TV series is on the way, and cable channel Disney XD has given the show an early greenlight for a second season ahead of its premiere this fall. Big Hero 6: The Series is now guaranteed for at least two years of fist bumps, superheroes, and lollipops.

Season 2 of Big Hero 6: The Series was announced early Tuesday morning by Disney XD Senior VP Marc Buhaj in a press release. “We are honored to have the opportunity to further expand the elaborate world and engaging characters of Big Hero 6: The Series with this early second season order,” he said. Buhaj’s announcement came with a video featuring the cast and Marvel’s Stan Lee celebrating with fist bumps — Baymax’s favorite gesture of friendship.

Taking place after the events of the 2014 CGI film, the new series — animated in 2D — continues the adventures of the Big Hero 6 as Hiro becomes the new kid on campus at San Fransokyo Institute of Technology. Most of the film’s stars return to reprise their film roles, including Ryan Potter (Hiro), Maya Rudolph (Aunt Cass), Jamie Chung (GoGo), Scott Adsit (Baymax), Alan Tudyk (Alistair Krei), and Genesis Rodriguez (Honey Lemon). New to the series is The Walking Dead’s Khary Payton voicing Wasabi and Brooks Wheelan as Fred.

Originally an unknown Marvel Comics series inspired by the tokusatsu superheroes from Japan, Big Hero 6 became a blockbuster animated film, directed by Don Hall and Chris Williams and was released in November 2014. Among other accolades, it won the Academy Award for Best Animated Film in 2015, one of the first superhero films to do so.

Big Hero 6: The Series will premiere this fall on Disney XD.