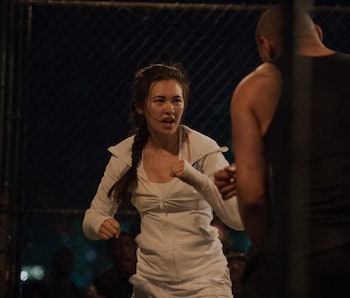 Reviews for Netflix’s Iron Fist were humiliating, but Jessica Henwick as Colleen Wing was one of the only actors in the show not torn to shreds. While it’s true that Iron Fist is boring and tone-deaf, and that Finn Jones never pulls off Danny Rand’s dialogue or combat skills, Henwick makes the most out of an underwritten role as one of the Marvel universe’s most dangerous combatants. Despite Iron Fist’s critical failure, Henwick will join the rest of the Defenders, alongside other minor heroes like Misty Knight and Hellcat, in the eventual team-up series. We’d better get a handle on who she is now before she’s fighting alongside Jessica Jones and Daredevil.

According to Marvel Comics, Colleen is the daughter of a Japanese martial artist and an American professor of “Oriental Studies,” which, of course, is the term that the comics used back in the mid-‘70s. She’s raised by her grandfather in Japan where she learns samurai arts, and when she moves to New York City, she comes across Misty Knight. Misty and Colleen become best friends almost immediately, and they open up a crime-fighting business they adorably call Knightwing Restorations, Ltd. Under deep cover, however, they call themselves, “Daughters of the Dragon.” When Danny Rand saves Jessica’s dad, she and Misty become open to teaming up with Heroes For Hire — Danny Rand and Luke Cage — on the reg.

Netflix’s Iron Fist doesn’t keep much from the comics aside from Colleen Wing’s name and her fighting skills, but it remains to be seen whether she’ll be fast friends with Misty Knight in The Defenders. In the show, Colleen only becomes friends with Danny because he keeps showing up at her door asking for help, which means she isn’t indebted to him and gets to have a snarky back-and-forth with the hero in every scene they share.

What the Netflix show improves is Colleen’s penchant for being kidnapped, brainwashed, held at gunpoint, and blackmailed. In the original comics, especially for a master samurai, Colleen is pretty useless. Her primary claims to fame are being rescued by Misty Knight, Iron Fist, and Iron Fist again. In the show, however, Colleen has enough independence to run her own storyline, adjacent to Danny’s during the first six episodes.