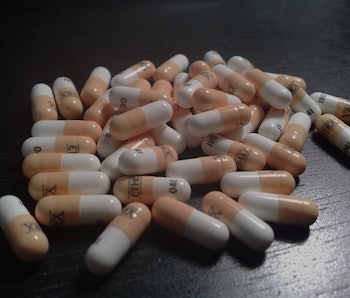 The number of deaths from opioid overdoses in the United States increased 280 percent from 2002 to 2015, with over 30,000 Americans dying from these drugs in 2015, according to the most recent statistics from the National Institute on Drug Abuse. This number not only accounts for deaths from illicit use, but also from legal prescriptions. Many people take opioids to treat chronic pain or to recover from surgery, and it’s easy for a medical user to become addicted to powerful narcotics such as Oxycontin, Vicodin, and fentanyl. America’s opioid epidemic seems to have become a cultural mainstay, but if forward-looking medical researchers have anything to say about it, things could change soon.

A team of researchers from the Free University of Berlin, the Zuse Institute Berlin, and the Washington University School of Medicine have collaborated to discover a new opioid that relieves pain without creating the potential for abuse or overdose.

In a study published Friday in the journal Science, these researchers report that they’ve developed an opioid painkiller that’s been proven effective in rats without producing any of the negative side effects associated with conventional opioids: addiction, slowed respiration, and constipation, just to name a few.

Senior researcher Christoph Stein, of the Free University of Berlin, and his colleagues used computer simulations to develop a novel chemical compound, called (±)-N-(3-fluoro-1-phenethylpiperidin-4-yl)-N-phenyl propionamide — NFEPP for short. NFEPP works much like the powerful opioid fentanyl, except it only targets inflamed tissues, bonding to them because of their lower pH.

“We expected to find a compound that would produce pain relief by selectively activating peripheral opioid receptors without eliciting adverse side effects via opioid receptors in the brain or gut,” Stein tells Inverse via email.

“We were pleased to find our initial hypotheses confirmed by the experimental results,” he says.

The researchers caused pain and inflammation in rats’ paws, then treated them with varying amounts of fentanyl and NFEPP. They found that both drugs worked, but NFEPP only affected the inflamed paws, whereas fentanyl had a full-body numbing effect. Fentanyl also created the hallmark effects of opioids in the rats: depressed respiration, drug-seeking behavior, and eventually death. But NFEPP did none of these, even in quantities that would be lethal for fentanyl doses.

Stein hopes to synthesize this drug in much larger quantities and continue researching its viability. Hopefully it can eventually become part of the effort to stem the growing opioid epidemic.