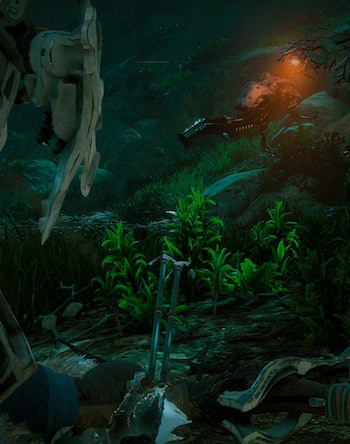 When you are out roaming around the post-apocalyptic landscape of Horizon Zero Dawn, you’ll come across hundreds of different machine parts, herbal ingredients, and other resources. Some items are obviously going to be more valuable and harder to obtain than others, but the important thing to remember about every item you come across is that they can be used as both currency and component. Knowing which route to go is important.

So, while a set of Echo Shells may sell for a good price, they can also be used to craft Tearblast Arrows, which are invaluable in stripping armor of heavier machines in combat scenarios. This dynamic — currency vs. component — is consistent throughout the entirety of Horizon Zero Dawn. Here are a few tips to help you make the most of the resources you find in the world.

Craft Ammunition Only When Needed

One of the first and most important things you’ll be using resources for is crafting ammunition to use with the four weapons you have equipped at any given time. Usually, these are broken down into Arrows, Bolts, Bombs, Wires, and Tie-Ropes, but no matter the weapon type one key rule remains the same: the more advanced the weapon, the rarer materials are required to craft ammunition for it.

For example, a basic hunter bow ammo pack, which includes 10 arrows, only requires two Ridgewood and one Metal Shard to create, while a set of five precision arrows for the more advanced Sharpshot Bow requires ten Ridgewood, eight Metal Shards, and five Wire to create. Since more resources are going to be required to craft ammunition down the road, don’t waste rare resources on ammunition you won’t be using in combat — craft as you go and conserve the rare materials for when you really need them in a bad combat scenario.

Don’t Forget About Potions and Traps

Even though they are a little less obvious than ammunition or the items in your inventory, potions and traps are a valuable tool you’ll want to have access to while fighting against big machines or large groups of human enemies in Horizon Zero Dawn. Every plant you pick up while roaming the world can be turned into resistance potions which can give you an advantage against a specific damage type, meanwhile all the meat you obtain from hunting living game can become health potions which will instantly restore massive portions of your health bar in combat.

Traps are more direct, allowing you to kick off a fight with a bang or to stun an enemy machine to strike its weak point — just remember that they require a much greater amount of resources to construct. Always maintain a healthy supply of both potions and traps, whether you end up using them in combat or selling them to a merchant to clear some room for additional resources in your inventory.

Every type of thing you carry in Horizon Zero Dawn — like weapons, outfits, resources, and ammunition — has a dedicated satchel with a limited storage capacity. During the beginning of the game, these are ridiculously small in capacity and only allow you to carry a handful of resources and ammunition until they are upgraded. Thankfully, you can expand each of the inventory satchels a handful of times once you’ve collected the appropriate resources, which is something you should do a few times as soon as you feel comfortable hunting the machines and wildlife out in the world.

Most of the earlier upgrades are easy to complete, while many of the end-game ones require an absurd amount of resources, so always be on the lookout for rare drops from animals like skins and bones to make your final inventory upgrades a little less frustrating.

Following a long hunt against a few Sawtooths or Bellowbacks, you’ll probably have a few rare resources like Machine Cores of Hearts which are worth a hefty amount of Metal Shards to the merchants scattered about Horizon Zero Dawn. While it may be tempting to sell them immediately for metal shards that you can use to purchase other goodies from the shop, always be sure to check and see if any NPCs you know are willing to trade rare equipment for them instead.

While most lower-end outfits and weapons can be purchased using only Metal Shards, a few quest rewards and pieces of high-end equipment require you to trade a large amount of Metal Shards paired with a Rare Machine Component. Towards the end of the game, you will hit a point where you no longer need Rare Components, which is where it’s okay to turn a few of those Rare Components into Metal Shards to clear up inventory space. Until then, however, always keep a handy stock in case you find the perfect outfit on a merchant in the middle of nowhere.