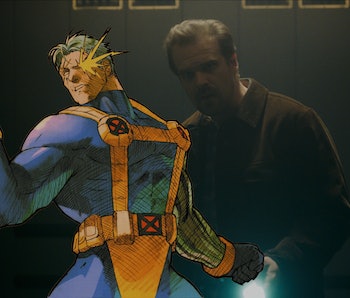 Deadpool is about to go to the Upside Down, sort of. David Harbour, who played Chief Jim Hopper on Netflix’s summer hit Stranger Things, has screen-tested for Cable and is a popular candidate by the studio to take the role for Deadpool 2, the sequel to last year’s mega-hit Deadpool.

TheWrap is reporting that Harbour, whose credits besides Stranger Things include Suicide Squad, several Law & Order appearances, and HBO’s The Newsroom, is said to be 20th Century Fox’s first choice for the role. The studio has reportedly gone so far as to have Harbour test for the part.

Last year, Deadpool called his shot in the hilarious post-credits scene by announcing his buddy Cable for his film’s sequel before Deadpool 2 was even formally announced. After the Tim Miller-directed picture took in more than $700 million worldwide, it was all but guaranteed.

Cable is a popular X-Men character who is frequently paired with Deadpool as a kind of reluctant partner. Hailing from an alternate future timeline, Cable, aka Nathan Summers, is the son of Scott Summers (better known as Cyclops). He was created by Chris Claremont in 1986, but was fleshed out as an adult by Louise Simonson and Deadpool co-creator Rob Liefeld in The New Mutants #87 in 1990.

Cable was brought in as a mentor for the New Mutants, but later regrouped them into a new team called the X-Force. Years later, Deadpool joined the X-Force alongside Wolverine and others in Rick Remender and Jerome Opeña’s Uncanny X-Force in 2010. Although it’s still a long way away, there are signs pointing to X-Force serving as the basis for Deadpool 3.

Work on Deadpool 2 is currently underway, and we’ll presumably know for sure who will be playing Cable soon.