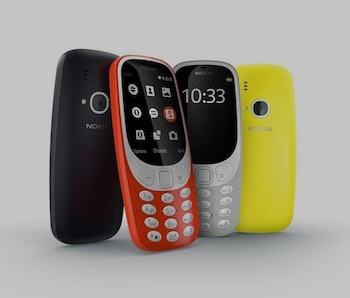 Before smartphones, everybody who was anybody had a Nokia 3310. It came loaded with state-of-the-art features like Snake and T9 — the original autocomplete — and it held a charge for days, so you rarely needed to leave the house with a charger. It’s no wonder that Nokia sold over 125 million of them. Now, nearly 17 years after the original phone’s release, Nokia has announced that it’s rebooting the indestructible little brick.

At the Mobile World Congress, a technology conference held annually in Barcelona, CEO of HMD Global (the company that now owns Nokia) Arto Nummela announced the 3310’s return. The announcement — kicked off by the Nokia ringtone that’s become synonymous with the 3310 — came as an afterthought at the end of a press conference.

“Let me re-introduce the iconic Nokia 3310,” says Nummela. He then proceeds to rattle of the phone’s features: 22 hours of talk time, one month standby time, and of course, Snake.

“And it has our Nokia ringtone,” he says, as he takes a bow and exits the stage. The announcement lasted just a couple minutes, but it covered all the things about the 3310 that matter. Well, there’s also the fact that the 3310 has a micro-USB charger now.

With a marketplace full of increasingly advanced smartphones, the 3310 is not intended to compete with them but to provide a reliable, capable phone for people who can’t afford the flashier models. The 3310 will cost just about $50 when it’s released in Europe, putting it within the financial reach of far more people than, say, an iPhone or a Galaxy.

After Nokia seemed to fade from the mobile phone marketplace, these competitively priced devices may be just what the company needs to put it back into the mainstream.