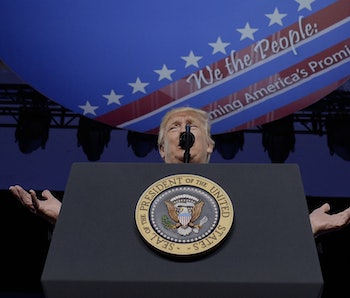 On Friday at the Conservative Political Action Conference, President Donald Trump delivered a wide range of promises, some of which were downright contradictory, including one remarkable about-face 32 minutes into his speech.

Trump vowed to “lift the restrictions on American energy, including shale oil, natural gas, and beautiful, clean coal and put the miners back to work.”

Then, just 54 seconds later, he said, “And by the way, I want regulation. I want to protect our environment.”

The overriding message Trump likely intended to send with that “clean coal” promise came when he said that miners will be going back to work. It was the bit about the miners that earned him a standing ovation, after all. It’s easy to understand why Trump is drawn to that position. It has less to do with coal itself and more to do with satisfying a critical base of his supporters.

But there’s a problem with that strategy. In the long term, Trump can only keep that promise if he actually does move towards a resurgence in coal usage. That’s something he simply cannot do — regardless of whether or not the word “clean” is tacked in there — if he also cares about protecting the environment.

See also: The Blue Collar Job of the Future Is Solar Panel Installer

“Clean coal” is a pipe dream. Its realization depends on implementing the difficult and costly process of carbon capture and storage (CCS). Given the degree to which the coal industry is already struggling, that process isn’t something they’ll be excited — or even able — to adopt with any speed. It’s just not cost-effective for the energy it produces. Goldman Sachs predicted in a 2014 report that, even by 2020, just one one-thousandth, or .0001, of coal energy around the world will be put through CCS.

Here’s the reality: A Trump-led coal resurgence would consist almost entirely of regular (read: dirty) coal, which will only hurt the environment and make combating climate change more difficult — even impossible.

But even if Trump was only paying lip service to the environment at CPAC — which seems likely, given his choice of Scott Pruitt to head the EPA — the fate of coal still looks bleak.

Jobs in clean, solar energy, not fossil fuels, represent the fastest growing industry in the United States, outpacing the average job growth 12 times over. As much as some would like to deny it, the future of American energy will have very little to do with coal. If Trump is serious about maintaining the coal-mining segment of his supporters when 2020 rolls around, he’ll need to find something else to offer them. A universal basic income, perhaps?

More like this
Science
8.6.2022 5:00 PM
Earth is spinning too fast — the consequences for timekeeping may be unprecedented
By Andrew Moseman
Culture
22 hours ago
These genius, cheap things make your home so much better with almost no effort
By Christina X. Wood
Science
21 hours ago
Is Planet 9 real? New observations fail to reveal the hypothetical orb
By Brian Koberlein and Universe Today
Related Tags
Share: