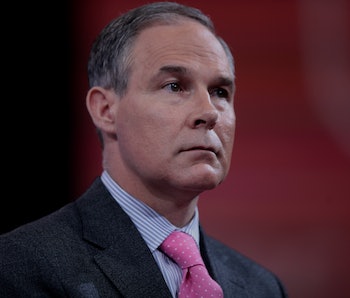 Scott Pruitt might be the greatest threat to the environment since the automobile. He’s in favor of fracking, supports the coal industry, and is a noted global warming skeptic who has sued to limit the U.S. Environmental Protection Agency’s ability to regulate greenhouse gasses. Yet he’s Donald Trump’s pick to lead the very agency whose influence he wants to curb — and that should worry anyone who cares about the environment, inside or outside the EPA.

Pruitt is currently Oklahoma’s attorney general. He’s used that position to attack the Obama administration’s policies, and if he’s put in charge of the EPA, he could undo many of the agency’s accomplishments. Here’s where Pruitt is likely to focus his attention when he takes over his least-favorite regulatory agency as Trump settles into the Oval Office.

1. The Clean Power Plan Could Be Kaput

The obvious candidate is research on climate change. Pruitt has said that scientists are mixed on global warming and that the Clean Power Plan “is an unlawful attempt to expand federal bureaucrats’ authority over states’ energy economies in order to shutter coal-fired power plants and eventually other sources of fossil-fuel-generated electricity.”

The Clean Power Plan is meant to reduce pollution at power plants. The EPA published model rules on Monday and said there’s “potential for completing the agency’s work on these materials and finalizing them at a later date.” That’s unlikely. Pruitt wrote in National Review that the proposed rules undermine the United States’s democratic principles:

The Clean Power Plan was promulgated without any consultation with Congress. No bills were debated, no votes were taken, and the representatives of the American people had no opportunity to object or offer their own suggestions. The checks and balances built into our system of government were simply ignored as inconvenient impediments to the president’s agenda.

So that’s probably going to be nixed.

The EPA’s waffled on the risks to drinking water created by hydraulic fracking in its final report on the practice released earlier this month. The agency notes several times that “uncertainties and data gaps” limits its ability to draw conclusions.

Trump is surprisingly open to states and municipalities banning fracking on an individual basis. Pruitt is firmer in his support of fracking — which could very well have something to do with the support he’s received from energy companies.

Pruitt and other attorneys general had “a secret alliance” with energy firms. Those firms sent a draft letter to Pruitt’s office; his staffers then changed a few words around, moved the letter over to official stationery, and sent it to Washington with Pruitt’s signature at the bottom, according to a New York Times investigation published in 2014.

His ties don’t stop there. Pruitt’s also led the Republican Attorneys General Association, which has been supported by Sheldon Adelson, Murray Energy, Koch Industries, and others with ties to the energy industry. Those groups financially support the attorneys general, and in return, they’ve found new supporters in their battle against EPA regulations. Now one of those people is going to be right at the head of that very same agency.

4. Breathe in the Carbon

Perhaps the greatest danger is that Pruitt will find a way to hinder the EPA’s ability to regulate greenhouse gasses. He’s already done so, actually — in 2012 he fought against the agency’s right to impose those restrictions with other conservative attorneys general. Now he can fight against those powers from the inside.

5. “What Conferences Have You Attended?”

Little wonder, then, that scientists are trying to save climate change data from Trump’s administration. The agency is at a crossroads — and the people who work for it might have to think about finding new jobs once Pruitt starts to control their paychecks.

Trump’s team previously asked the Department of Energy to list the employees and contractors who worked on climate change issues and attended scientific conferences on climate science. The Energy Department refused, but Trump probably isn’t done yet.

Pruitt has fought the agency many times in the past, says he doesn’t believe the science of global warming, and has been in the pockets of energy companies for years. Trump seems indifferent to the environment but Pruitt’s actively hostile.