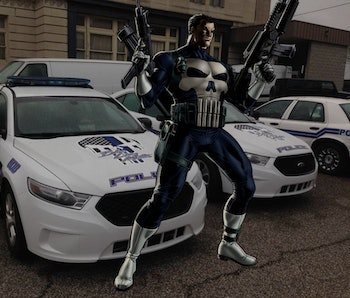 Among the many characters in the Marvel Universe, The Punisher is perhaps the least deserving of reverence. A mercilessly violent vigilante, Frank Castle takes justice into his own hands because he believes the law isn’t enough. Yet, his symbol — a death skull — has been appropriated by several real law enforcement agencies in a gross demonstration of missing the point. This week, a Kentucky department learned what it really meant after it brandished several vehicles with the Punisher’s skull.

In Catlettsburg, in eastern Kentucky, the town’s police purchased decals of the Punisher’s skull, modified with colors from Blue Lives Matter, and placed on the department’s sedans and SUVs. Police Chief Cameron Logan, who thought it was a warrior symbol, said the decal was meant “to give back” to the officers. “That decal represents that we will take any means necessary to keep our community safe.”

Logan said those to a local paper, the Herald-Leader before he learned where the skull came from. “We’re getting so many calls, and they’re saying that the Punisher logo [means] we’re out to kill people, and that’s not the meaning behind that,” Logan told io9. “That didn’t cross my mind.”

A Google search would have helped. The Punisher, introduced as a mercenary to kill Spider-Man in The Amazing Spider-Man #129, is an ex-Vietnam vet who arms up to exact revenge for the murder of his family. Unlike most “superheroes,” Frank Castle has no powers except his weapons training and ruthlessness. The Punisher, true to his name, kills anyone he thinks deserve it.

Marvel writers and filmmakers understand Frank Castle well and have portrayed him as the farthest thing from a model figure. Not only has Punisher killed without due process — the exact opposite of how police should behave — but he’s also emotionally unhinged, such as in Season 2 of Daredevil. Captain America, a paragon of America’s virtues in the Marvel Universe (at least before he became a HYDRA agent), has punched out Punisher for acting carelessly and vehemently disagrees with his methods.

Though the Punisher is an attractive icon for blood-thirsty readers, he’s not an appropriate symbol for police. Yet he’s been unofficially placed on t-shirts, hoodies, and mugs for Blue Lives Matter, a counter movement for Black Lives Matter which campaigns against systemic racism and police brutality towards black citizens.

Proponents of Blue Lives Matter maintain they are not prejudiced or racist — Logan used that defense when he first talked about the decals, saying “I’m not racist or anything like that” — but the argument of Black Lives Matter is that police who act without restraint must be held accountable. And it’s in the best interest for police to foster trust from citizens they protect. Neither are unreasonable asks, but the Punisher is not a reasonable symbol.