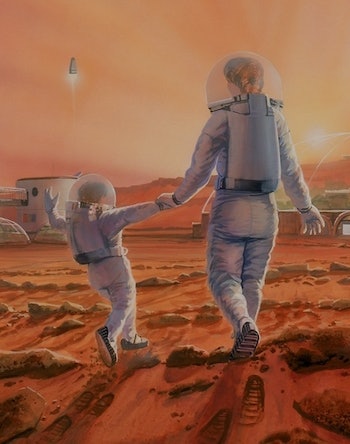 The instantly iconic image of a barely ruffled American flag, perched proudly at the top of the Lunar Flag Assembly, ran on the front page of LIFE magazine’s August 8, 1969 issue. The photograph, part of a series taken by Neil Armstrong and Buzz Aldrin, wasn’t just for American eyes. It was a masterful piece of propaganda that heavily implied the United States had taken a permanent lead in the space race by claiming the moon in much the same way it had claimed Hawaii a decade earlier. But no country owns the fifth-largest natural satellite in the solar system. And, unless changes are made to international laws, no country will own Mars even if NASA arrives on schedule in the 2030s.

Futurists have been talking about colonizing Mars since the German Jesuit scholar Athanasius Kircher got excited about a plan in the 17th century. But implicit in the idea of colonization is a premise that may not apply. Colonization connotes sovereignty and ownership. Those concepts define nations and international relations on Earth, but map poorly to the Martian surface for economic and legal reasons. Resources on Mars are limited and inefficiencies are massively expensive. Free markets aren’t likely to emerge rapidly. There are plenty of places — Antarctica, Diego Garcia— where similar constraints have led to the creation of more martial installations. But this process is much more complicated on Mars, because international treaties make it illegal for parties to claim land. (Flags can be planted, but they are just flags.) Given the high value of a scientific or military Martian installation and the lack of legal means to protect it, countries and private entities aiming for the red planet are taking a leap of faith in the adaptability of Earth’s political and culture technologies.

They are betting, in short, that Mars won’t become a battlefield and, furthermore, that Martian conflicts won’t result in crises on Earth. It’s unclear if that’s a smart bet.

The countries and companies (including SpaceX, NASA, the United Arab Emirates) interested in colonizing Mars do have more to go on than optimism. They have the 1967 Outer Space Treaty, which was created in the midst of the Cold War as a framework for dealing with potential conflict in space. And it hasn’t exactly made a smooth transition into the 21st century. The treaty is not only 40 years old and outdated, but represents the product of a negotiation between two hostile and neurotic superpowers looking to avoid nuclear holocaust, not share unclaimed territory.

“Russia was worried that the United States was going to claim areas of space as their own,” explains Jacob Haqq-Misra, a research scientist with Blue Marble Space Institute of Science. “The U.S. was worried that [the USSR] was going to do the same. Both sides were worried that nuclear weapons might get placed into orbit or even on the moon.”

The result? A treaty that creates a protocol for planetary protection, bans weapons of mass destruction in orbit, and explicitly forbids military installations beyond the atmosphere. Then there is the diciest part: “Outer space is not subject to national appropriation by claim of sovereignty, by means of use or occupation, or by any other means.”

But neither America nor SpaceX want “outer space” as such. They want continuous access to Helium-3, precious metals which are increasingly rare on Earth, and access to ice or liquid water which could be used in sustainable spaceflight technologies.

“There’s an ambiguity in how you interpret the Outer Space Treaty,” Haqq-Misra says. “It’s precisely this ambiguity that permits the U.S. and Luxembourg to justify the mining of resources in space. They claim states and companies operating under the purview of their states are not claiming sovereignty over land, merely claiming resources.”

Haqq-Misra thinks it’s critical for the international community to have new ideas about space governance. He says this is especially important because private companies are likely to play a role going forward that no one envisioned in the late 1960s. He’s far from alone in thinking that the treaty is dated, but the solution to that problem remains unclear. As Frons von der Dunk, a space law expert at the University of Nebraska-Lincoln, points out, scrapping the whole thing might be “throwing a lot of baby away with the bathwater” given that it does not explicitly empower or disenfranchise any single entity. Ambiguity, however unintentional, allows for progress while avoiding a potential Martian land rush and the conflicts — likely between the U.S. and Russia — that could be provoked. And there’s not a clear demand for an alternative because there is no emerging consensus on what international space law should look during the second space age. States are not rushing to sit down and hash the issues out.

“I do not see that readily happening,” says von der Dunk.

Which means that it’s time to get creative about governance. Haqq-Misra does that by working backwards from specific, plausible scenarios. As an example, he describes a Chinese mission to Mars following on the heels of the successful creation of a SpaceX outpost. Would China want to avoid, say, anything within a 200-kilometer radius of Elon Musk’s biodome? Probably not and they wouldn’t have to either.

“They are free to land within SpaceX’s exclusive economic zone and, in fact, might do so because going to space is really difficult,” says Haqq-Misra. “They would probably need direct support from others who are already there.”

This only presents a problem if China seeks to extract resources from lands cultivated — whatever that looks like — by SpaceX workers. Within a system built on traditional ideas of sovereignty and land rights, this wouldn’t make much sense. Within a system he calls “Cooperative Sovereignty,” Haqq-Misra believes the interests of both parties, and humanity writ large, can be preserved. Along with his colleague Sara Bruhns, Haqq-Misra proposes a Martian economic system that seeks to encourage the type of scientific endeavors NASA and others want to pursue while providing incentives and rules to foster trade, mining, and habitation development. Every Martian colony would basically have an exclusive economic zone within a bounded radius of a given installation. Other nations could land in that area, but not claim it.

It’s not simply that that land could host valuable resources under the surface. Any colony that’s looking to do more than simply kick back in the minus 100 degree Fahrenheit temperatures and enjoy a gravity that’s one-third of Earth’s would need space for water treatment plants, greenhouses for growing essential plants and vegetables, structures that can house massive 3D printers used to build more structures, communications equipment for chatting with friends back on Earth, facilities that can generate fuel from Martian methane, a place for Martian robots to be built and programmed, and so much more. We haven’t even begun to touch on what will be needed for recreation (imagine playing soccer or football on the red planet), religion (Martian church on Sunday, anyone?), schools, administrative headquarters, etc.

Cooperative Sovereignty takes its shape from protocols outlined by the Antarctic Treaty System and the Convention on the Law of the Seas, both of which allow nations to claim resource access without claiming land. The history of international conflict on the high seas is not particularly encouraging — nor is the regular violation of the Law of the Seas — but the limited history of human conflict in Antarctica is.

”Not many people want to live there,” says Haqq-Misra. “You’ve got a bunch of science bases and people, for the most part, cooperate. There’s no violence. There’s very little military presence. There’s a moratorium on industrial mining or any sort of resource extraction for I think another 30 or 40 years. A lot of scientists like that model and, to some extent, we are loosely in that mode of operation with space today. You have free access if you’re a scientist in any nation to do research in space.”

Still, it’s important to remember that Antarctica is almost devoid of valuable resources. There are some deposits of iron ore, gold, copper, nickel, and platinum, and even some reserves of coal, but there’s not enough there to justify the expense of setting up an extensive mining operation built to withstand difficult conditions. Mars may prove similarly lacking in mineral riches, but Martian land could prove valuable in other ways, such as providing a base of operations for asteroid mining, or the development of extremely novel technologies that can only be made in a low-gravity setting. The Antarctica model works neatly when there’s not much to fight over.

When there is, things can get problematic. The notion of Martian economic zones is derived from the ability of nations to claim resources within a certain distance of sovereign shorelines. In theory, fleets from other nations cannot fish in those waters. In reality, it’s not always so simple. Over the last decade, territorial disputes in the South China Sea, an incredibly important trade route, have become disturbingly common. Because the United Nations has no way of actually enforcing any rulings it makes, countries — China in most cases — have been allowed to pursue extralegal agendas.

There is unlikely to be a U.N. peacekeeping force on Mars.

To resolve disputes on Mars, Haqq-Misra and Bruhns came up with a mediating body modeled after the fairly weak Antarctic Secretariat, which helps manage disputes between nations who are fighting in the South Pole.

Collins, a law expert at the City University of London, believes Mars has capitalism coming. He’s bullish on the idea of allowing private parties to lay sovereign claims to Mars, arguing that a strict motivation of profit could best facilitate productive development of Martian colonies.

In a 2010 paper, Collins wrote that common ownership and sharing of lands and resources “disregards the unequal burden of costs, and associated risks discouraging investment and productive use.” In his view, “the incentive to make these productive uses of the land of Mars necessitates non-communal ownership because private property rights encourage the maximization of a resources potential because of the prospect of higher individual gains.”

The rise in interest in Mars among private companies, however, makes profit a potential catalyst for both science and human progress. However, capitalist expansion could well lead to the proliferation of Earth problems — inequality, war, oppression, corruption — on another planet. It might make homo sapiens a multi-planetary species quickly, but it will not facilitate the sort of cultural or psychological transcendence that artists have often suggested lies among the stars.

And there’s the third way, the rejection of government and market expansion in favor of true independence. It should not be taken as a given that Mars will be populated one outpost at a time. If terraforming goes well and self- sufficiency becomes possible either through the export of valuable goods or through local production of essentials, Mars could be its own country. Being Martian could take on a new meaning and the government of that country could form itself to suit the sentiment of the governed.

There are two narratives that arrive at this end. In the first, the planet is always independent and land is never claimed until it is claimed by a local government. In the second, the planet frees itself from Earth colonists.

“At some point in the future [Martian colonists] may start rebelling against a faraway terrestrial government still claiming jurisdiction over them,” says von der Dunk. Imagine the tea party but with titanium and magnetite. Because space war is impractical and wildly expensive, the ultimate result of that decision might be a contested claim of sovereignty. China’s relationship with Taiwan might be a model of the future unhealthy Martian relationship with an Earth country.

“I don’t think it would take very long before you started to see the emergence of a new form of Martian society that is still very human, but a new type of human,” says Haqq-Misra.