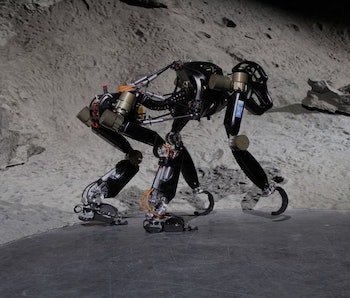 On Tuesday, NASA announced it was “seeking information from potential partners” who were interested in designing small robotic payloads that could be launched and sent to the surface of the moon within a 2017-2020 timeframe. The subtext of this announcement, of course, is that NASA is looking to use the moon as a proving grounds for testing and refining the kind of technology necessary for establishing a permanent human outpost on Mars.

NASAs announcement calls for private developers and groups to submit Request for Information (RFI) reports by December 9, outlining exactly what kind of data those organizations are interested in collecting, how they would help contribute to an understanding of the moon, and the type of robotic technology such projects might test out.

NASA’s primarily interested in learning how to use robotic missions to the moon to understand how future missions to Mars can use technology to generate resources like water and oxygen, create usable fuel for spacecraft, conduct in-space and extraterrestrial manufacturing and construction, and other operations relevant to making a future Martian colony work.

“There are many stepping stones on the Journey to Mars, and though we have gathered a great deal of information over the decades about the moon from the earliest robotic probes, from the Apollo missions, and more recently from spacecraft such as the Lunar Reconnaissance Orbiter and others by NASA and the international community, there is still much more that we need to learn,” said William Gerstenmaier, NASA’s associate administrator for human exploration and operations, in a news release. “Today’s request for information reflects NASA’s interest in improving our understanding of the moon’s potential for exploration, and leveraging the private sector’s investments in commercial space companies to help us do so.”

Robots will be essential not just for maintaining and operating a Martian colony, but building it up as well. Gerstenmaier and others have previously expressed a vision that NASA and others would first send robots to Mars to essentially build a Martian base camp that is fully functional by the time the first human colonists are ready to settle the Red Planet.

Testing out those robots beforehand is key — and the closest analogue we have to that kind of low-gravity, thin-atmosphere environment is the moon. A lunar environment is especially useful to trying out different kinds of landing systems, since the absence of an atmosphere on the moon is partially similar to the extremely thin atmosphere of Mars.

Although NASA has elected to concentrate on Mars and leave lunar colony dreams to Europe and Russia, the agency seems to be reaffirming plans to take advantage of the moon as a key component to future missions to Mars. There’s good chance this RFI announcement is a prelude to small lunar missions scattered across the next decade or so.